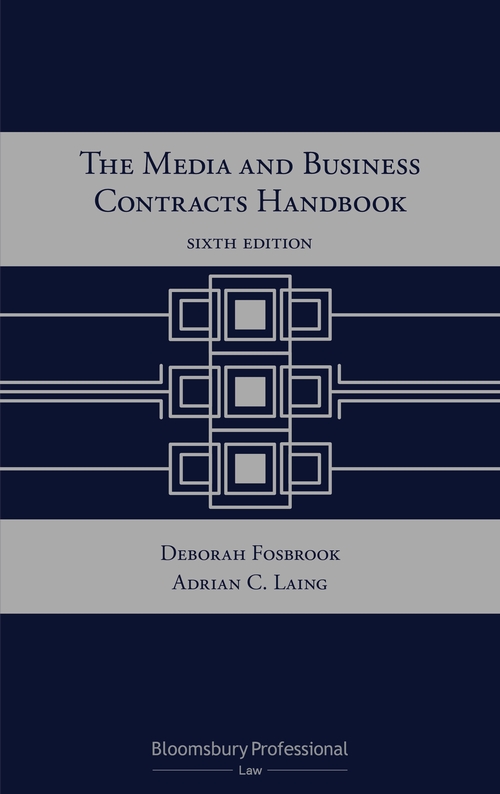 Provides the tools for the user to construct a contract in a logical format and draft the terms in language that both parties can easily understand and put into practice and the accompanying digital download reduces administration time in the office.

The book has a number of functions:

1. As a starting point and framework for an agreement.
2. To compare and analyse other contracts you are working on.
3. As a background guide and training tool.
4. As a reference tool for websites and trade codes of practice.
5. The commentaries can be read as guides to the intended aims of a specific contract.
6. The checklist of clauses can be used to ensure you have covered important issues.
7. To achieve a clearer understanding of a transaction.

INTRODUCTION
CONTRACTS AND COMMENTARIES
Apps/Digital
1 App Development Agreement
2 App Purchase Agreement with Profit Share
3 Data and Digital Marketing Campaign Agreement
4 Digital Rights (Publishing) Agreement
Website/Internet/Social Media
5 YouTube Contributor Deal
6 Website Standard Terms and Conditions
7 Website Commissioning Agreement
8 Product Supply Agreement for Online Purchasing
9 Freelance Contributor’s Agreement for Website Design
10 Blog Contributor Agreement
11 Agreement between Website Owner and Contributor for Personal Interactive Website
12 Buy-out of Images/Photos for Instagram
13 Interview Agreement for All Media
14 Podcast Agreement
General Business and Commerce
15 Brand Collaboration Agreement (‘BCA’)
16 Heads of Agreement: ‘BCA’/Entrepreneur
17 Binding Determination of Dispute: Terms of Reference
18 Asset Purchase Agreement
19 A Foundation Shareholders’ Agreement (‘FSA’)
20 Joint Venture Agreement: (Royalty-Based) ‘JVA’
21 Heads of Agreement for Entrepreneurs: Pre-JVA
22 General Out-Sourcing (B2B) Agreement
23 Trade Mark User Licence Agreement
24 Termination Agreement
25 General Terms and Conditions of Supply
26 General Terms and Conditions of Purchase
27 All Media Buy-out of a Work
Publishing Agreements
28 Publishing Agreement between Publisher and Author
29 Translation Agreement
30 Packaging Agreement: Profit Share
31 Ghost-Writer’s Agreement
32 Collaboration Agreement between a Writer and an Illustrator
33 Serialisation of a Book
34 Novation
35 International Distribution Agreement
Agency
36 Appointment of a Merchandising Agent
37 Agreement between an Agent and an Actor
38 Agreement between Professional Sportsperson and Manager/Agent
39 Agreement between a Celebrity and an Agent
40 Agreement between a Literary Agency and an Author
Employment, Contracts for Services and Confidentiality
41 Contract of Employment for Executive Board Director
42 Compromise Agreement
43 B2B Confidentiality Agreement
44 General Contract for Services
45 Zero Hour Engagement Agreement
46 Film Director Agreement
47 Agreement between Consultant and Production Company
48 Agreement between On-Screen Contributor and Production Company
49 Presenter’s Agreement for Series with Profit Share
Sponsorship and Image Rights
50 Image Rights Agreement
51 Sponsorship Agreement between Sponsor and Professional Sportsperson
52 Sponsorship of a Television Series
53 Sponsorship Agreement with a Sports Association for a Televised Championship Event
54 Sponsorship of a Music/Arts Festival
Advertising, Promotion, Product Placement
55 General Advertising/Promotion Agreement
56 Agreement between Celebrity and Company for Advertising Campaign
57 Product Placement in a Television Programme
58 Promotional Use of a Company’s Logo
59 Advertisement for Broadcast Agreement
60 Production and Buy-Out of an Advertisement for Broadcast
61 Agreement between Organisers and Promoters of an Event
Film and Television Production
62 Pre-Production Option to Acquire an Exclusive Licence in an Author’s Work
63 Purchase Agreement: Film Based on Book
64 Buy-Out of All Rights in a Completed Film
65 Buy-Out of All Rights in Original Format
66 Exclusive Licence between Author and Production Company for a Series Based on the Author’s Work
67 Exclusive Licence to Broadcast a Film
68 Commissioning of a Pilot for a Television Series
69 Commissioning of a Film for Broadcast with Partial Assignment
70 Commissioning of a Series for All Media Worldwide Exploitation
71 Commissioning of a Series for Limited Worldwide Exploitation
72 Commissioning and Complete Buy-Out of All Rights in a Music Promo/Download
73 Appointment of a Film Distributor for Non-Theatric Rights
74 Pre-Sale of a Film for Non-Theatric Distribution
75 Exclusive Licence for the Use of Original Format
Exploitation of Characters, Designs, Artwork, Photographs and Three Dimensional Works
76 Exclusive Licence for Series Based on a Group of Characters
77 Licence Agreement with Distributor for use of a Character for a Specific Product
78 Exclusive Licence for Exploitation of a Board Game
79 Commissioning of a Collection of Three-Dimensional Works
80 Exclusive Agreement for Reproduction of Original Designs
81 Commissioning of Series of Photographs/Images (with Full Assignment)
Short-form Agreement, Letters and Competition Rules
82 Short Form Buy-Out
83 Short Form Banner Advertising Agreement
84 Addendum
85 Narrow Sub-licence
86 Short Form Non-Disclosure Agreement (‘NDA’)
87 Permission Form for Internet Distribution
88 Client Care Letter/Terms of Engagement
89 Data Protection/GDPR Subject Access Request (‘SAR’)
90 Freedom of Information Request
91 Laboratory Access Letter
92 Location Access Letter
93 General Release Form
94 Short Form Employment Letter Agreement
95 Employee Reference Letter
96 Letter of Complaint: Defamation on the Internet
97 Competition and Prize Draw Rules
Specific Clause Meanings
Codes of Practice and Guidelines
Legal, Commercial and Business Internet Directory
Terms of Use
“Whether a large publishing conglomerate or a part-time writer or actor, this book is indispensable. Full of common sense and jargon-free explanation, The Media and Business Contracts Handbook not only provides contract templates for every situation, but encompasses everything you need to know about all aspects of the media world, ensuring that no legal detail is overlooked in the creative rush.” –  Greg Hill, MD, Atlantic Publishing,

“The Media and Business Contracts Handbook has always been for us the “go to reference” whenever any film or media contract drafting has been required, now in the excellent and updated Fifth Edition it has brilliantly embraced the digital and app world continuing to give us as film producers all the comprehensive data that we need all in one place, in the same clear and very readable style that has separated it from all others, as the premiere contract reference source in the industry. Wholly recommended.” –  Philip Ettinger, CEO, Ettinger Brothers Film Productions,

“As a publishing company requiring agreements from book titles to brand licensing and photographic to digital content rights, this handbook is probably going to be the most useful and cost effective tool that we have invested in this year.” –  Jeremy Yates-Round, Managing Director UK & Europe, Haynes Publishing,

“Clear, concise and written with the layperson in mind, this is the essential reference book for any media contract negotiation and the Fifth Edition brings it bang up to date by covering all aspects of digital publishing. From content provider to publisher, trademark licence to sponsorship agreement – and all avenues in between – this is an invaluable resource.” –  Louise Dixon, Senior Editorial Director, Michael O’Mara Books,

“… invaluable in dealing with all sorts of agreements with which I have little experience from apps and image rights to television presenting and merchandising. Good sections, also, on letters of engagement, film and tv deals, publishing agreements and dealing with defamation on the internet.” –  Andrew Lownie, best-selling author and literary agent (review of a previous edition)