This article describes the way that Clerksroom operates. I will be writing a second article for the next issue covering BarristerWeb and, in a third article, I will be looking at other chambers who are incorporating some “virtual chambers” ideas into their more conventional operation – a sort of virtual chambers by stealth.

Clerksroom do not actually call themselves a virtual chambers – in fact, they do not generally call themselves a chambers at all. On their website, www.clerksroom.com, they describe themselves as “Europe’s leading practice administration service for barristers, arbitrators and mediators in independent practice”. However, they do not argue with the term “virtual chambers” when used by others and indeed, the methods they are using could well be one of the models of the future for the way the Bar operates.

There are 61 barristers in Clerksroom at present, registered (virtually) in chambers at 218 Strand and Equity House, Taunton. Barristers do not generally have an actual room in these locations, but they can have, if they wish, or they can book a room for particular meetings. The two chambers are both headed (jointly) by Jonathan Dingle and Harry Hodgkin.

IT for the virtual chambers

The key to the operation of this (and possibly any other) virtual chambers is the availability of web-based software for all aspects of chambers and barristers management. This means that there is no “computer room” for chambers’ computers, no special requirements for barristers’ PCs beyond an ability to access the internet and no direct responsibility for keeping software or security systems up to date.

The software comes from Meridian, the long-term leader in barristers’ systems who provide the software for 95 per cent of the Bar, and this seems to provide everything which a virtual chambers could require. Meridian was bought a couple of years ago by Mountain Software – see www.mountainsoftware.co.uk/mlc.asp for more on how the system works. (Mountain was recently purchased by the Computer Software Group; even more recently, the CS Group was itself purchased by the IRIS Software Group. As far as I can gather, these changes of ownership have not yet given undue problems, however).

The Meridian system is run on a “server farm” in a secure data centre in a secret location in the North of England. Chambers can access the software from a series of PCs at their clerking centre and barristers can access their own parts of the system (diary, case management, billing information, email and Office) from their own PCs, PDAs or notebook computers, wherever they are – even if working, or on holiday, in far off parts of the world.

Each person (barrister, clerk, chambers manager) has a different front page to the system, referred to as a digital dashboard. This can include diary bookings, reports and statistics, outstanding work and online services. A particularly useful aspect of the system for the clerks is a Customer Relationship Management System which stores all the chambers’ marketing data, including all customer contacts, and enables (for example) appropriate mailshots to be sent out.

Despite the ability of barristers and clerks to access the system from anywhere, there still does need to be a physical address to manage incoming post, telephone calls, faxes and DX and transfer calls, scan in documents and send things on to barristers, as appropriate. The management centre is at Taunton and a team of 20 staff is based there, as well as the overall management of Clerksroom; in particular, Martin Davies is Chambers Director and Stephen Ward is Managing Director. Because the centre provides a worldwide clerking operation, there is always someone on hand to deal with matters whatever the time of day in the UK.

How the finances work

All barristers are required to attend Clerksroom HQ for an interview before they are taken on and they also have to sign a service agreement. Stephen Ward explains the philosophy behind the agreement:

“We make a clear distinction between the delivery of legal services, for which the barrister is responsible, and clerking, for which Clerksroom is responsible. They are considered equally important.”

The cost to the barrister is 10 per cent of earnings, subject to a minimum standing order of £600 a month, which is substantially less than most traditional chambers charge their barristers. Other facilities, such as to be part of 218 Strand and/or to have a room there, can be negotiated.

Only barristers with earnings or potential earnings of £100,000 or more are considered. This probably excludes most part-time barristers and indeed most of the 61 are full time.

Expansion is expected but not at a precipitate rate and about one barrister a month is being added at present. Apparently, a new barrister needs quite a bit of support in the first months to ensure that everything goes smoothly.

Clerksroom has negotiated group discounts for just about everything that is currently available online, including Westlaw UK, LexisNexis, Justis and Lawtel. Members benefit from being able to opt in or opt out of the group scheme as they wish with little or no commitment.

Whilst the topic of marketing remains the best kept secret at Clerksroom, the basis of all marketing campaigns is pretty traditional. Martin Davies explains:

“The most powerful marketing tool is the product itself, putting most of the emphasis on the barristers who work daily to deliver the service to the customer. Our real focus is on quality through every step of the process from initial instruction to receipt of payment. We can and do send mailings by post, DX and email and we follow this up with personal presentations to partners when invited, but all such efforts are pointless if the barristers do not deliver to a consistently high level every time.” 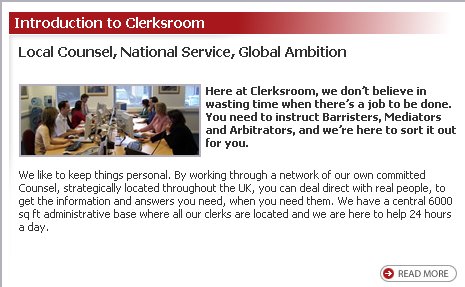 This is a self-contained booking system operated by Clerksroom but open to other chambers and all solicitors. Solicitors or anyone else approved by the Bar Council can submit details of a hearing for any court centre in England and Wales for which a barrister is needed, together with the proposed fee. The system is monitored by clerks and the work is allocated to an available Clerksroom barrister or to other chambers and individual barristers registered with the system. Details are then provided to the person needing the barrister, usually by telephone, to ensure that the arrangement is acceptable. The service is supported by many Chambers in England and Wales (91 are currently registered) ensuring that local counsel can be instructed where travel costs or time is an issue.

No fee is charged for this service (the Bar Council does not allow briefs to be “sold”) but a system of small donations is in operation and has been approved by the Bar Council, with the funds going to a charity of Clerksroom’s choice at the end of the year.

Is this the model of the future?

Chambers Director Martin Davies says that the trend is towards larger sets with more remote facilities and he is rather surprised that there are not already more organisations like Clerksroom in operation.

Delia Venables is an IT consultant for lawyers and joint editor of the Internet Newsletter for Lawyers.

One thought on “A virtual chambers – Clerksroom”