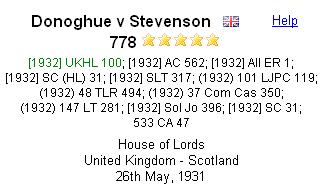 Free case law is old hat now. The House of Lords posted its first judgment on the web in 1996 and BAILII “freed the law” in 2000. But how far have we come since then? This article sums up the current position.

The Supreme Court at www.supremecourt.gov.uk publishes its Decided cases in PDF with accompanying press summaries.

The Current cases section provides full details of ongoing appeals and News and publications provides information on latest judgments, future judgments and permissions to appeal. You can search the judgments via the general site search or via the Decided cases search. RSS feeds of latest judgments are not available.

An archive of judgments of the former House of Lords from 1996 to 2009 is published at www.publications.parliament.uk/pa/ld/ldjudgmt.htm. The only search facility available is the general Parliament site search.

The Judicial Committee of the Privy Council at www.jcpc.gov.uk publishes its Decided cases from Nov 2009. The design and functionality of this new site is almost identical to that of the Supreme Court (see above), providing also information on Current Cases and News and publications. Privy Council judgments from 1999 to August 2009 and selected judgments pre1999 are published at www.privy-council.org.uk/output/Page31.asp

Inexplicably, HM Courts Service at www.hmcourts-service.gov.uk does not publish judgments of the England and Wales courts. It simply provides a note that judgments from the Civil and Criminal Divisions of the Court of Appeal, from the Administrative Court and the divisions of the High Court, selected by the judge concerned, are available for free by the good graces of BAILII.

The Scottish Courts Service at www.scotcourts.gov.uk publishes Court of Session, High Court of Justiciary and Sheriff Courts decisions from 1998. Access is via either a keyword search or a structured search. RSS feeds of recent cases are provided.

The Northern Ireland Courts and Tribunals Service at www.courtsni.gov.uk publishes its Judicial Decisions from 1999. You can search via the general site search or the judgments search. RSS feeds of latest decisions are not available.

The Tribunals Service site at www.tribunalsservice.gov.uk is a convenient gateway to all the tribunals sites, each of which publishes its own decisions. There is some commonality in the features of these databases.

BAILII provides access to the most comprehensive set of British and Irish primary legal materials available for free and in one place on the internet. BAILII includes over 80 databases covering 7 jurisdictions and in excess of 200,000 searchable documents.

There is still a restriction on the number of English cases from divisions of the High Court which can be added to the BAILII database, arising from the fact that the shorthand writers who transcribe judgments which have been given verbally (as opposed to those handed down on paper) own the copyright in the transcribed version of the judgment. This prevents the judgment being added to the BAILII database without the consent of the shorthand writer. BAILII, being a free website, has no funds with which to acquire a licence to copy and display these transcripts.

BAILII continues to press for the system to be changed so that all judgments may be freely available. A large number of transcribed judgments of the Court of Appeal and the Administrative Court for the period July 1996 to August 1999 were kindly provided by the official shorthand writers Smith Bernal. All handed down English Court of Appeal cases decided since July 1996 should be on BAILII.

Handed down first-instance decisions of the England and Wales and Northern Ireland High Courts are generally only provided to BAILII where the judge giving the judgment indicates that they are of sufficient interest to be made available for publication on the internet.

Decisions of the Irish Supreme Court and High Court are reasonably comprehensive since February 2001.

BAILII has few Northern Ireland cases decided prior to 2000.

BAILII has few Scottish cases decided prior to 1999.

Full coverage of House of Lords and Privy Council cases commenced during 1996.

Supreme Court cases are included from inception in 2009.

The OpenLaw project undertaken by BAILII during 2007–2009 was funded by JISC and aimed to support legal teaching in collaboration with academics, librarians and special interest groups such as the Society of Legal Scholars. Through review of subject syllabi, BAILII identified, scanned, converted to text and published over 2,500 judgments that are important in the core teaching areas of law. The OpenLaw project itself is now closed.

BAILII continues to negotiate with legal publishers for the freeing up of more historic judgments for publication. In 2009 the Scottish Council of Law Reporting gave BAILII permission to publish approximately 600 Scots law judgments that are frequently cited in judgments and are important in the core teaching areas of law.

Not on BAILII but on its sister site CommonLII is a database of the English Reports (1220-1873), based on data provided by Justis. The reports at www.commonlii.org/uk/cases/EngR are scans in PDF but are full text searchable, for the first time giving the world free access to the very depths of common law legal history.

The basic BAILII browse is by jurisdiction, then by court, and then alphabetically or by year / month / alpha.

For case law BAILII offers a standard simple search, selecting All databases or a particular jurisdiction, a Case Law Search or an Advanced Search (which is somewhat less advanced than the former!).

Advanced searches require use of Boolean terms and connectors. Whilst Boolean searches are familiar ground for information professionals, others will need to mug up on them. Most lawyers used to Google searches will be sorely disappointed if they just whack in a few keywords.

Results can be ordered by Title, Jurisdiction, Relevance, Date, or Date (oldest first). Relevance is according to Boolean criteria and the context of hits is not shown, so again, all but the professional searcher will feel somewhat at sea.

BAILII does not publicise the fact that it offers RSS feeds. However, selecting the Recent Decisions option on the left menu www.bailii.org/recent-decisions.html and changing the extension to rss, gives us the URL for the BAILII Recent Decisions feed:

This feed is not terribly helpful as it is one large feed in court-by-court order, matching the Recent Decisions web page. However, useful derivatives for individual courts have been created by me and several others using Yahoo Pipes – see pipes.yahoo.com/pipes/search?q=BAILII.

An important addition to the LII stable of websites is LawCite at www.lawcite.org – an international case citator from the good people at AustLII, also accessible via BAILII. You can search LawCite for a standard citation or by various criteria.

The LawCite database is generated on an entirely automatic basis from all the LII databases with no editorial input and includes a fairly complete collection of all common law cases cited in the past decade plus most of the important uncited decisions before this.

We’ll cover later some of the many excellent web services that have developed to provide up-to-date coverage of case law developments.