Key sites for keeping up to date with case law

BAILII (the British and Irish Legal Information Institute) provides access to the most comprehensive free and up-to-date collection of British and Irish primary legal materials on the internet with 76 databases covering 7 jurisdictions including the Court of Justice of the European Communities and the European Court of Human Rights. Also on BAILII are Law Commission publications and tribunal decisions. BAILII now offers RSS feeds for a variety of courts and other materials.

BAILII is legally constituted as a public trust incorporated in the UK. It is hosted in the UK and Ireland by the Institute of Advanced Legal Studies, London and the Law Faculty, University College Cork. The databases on BAILII are derived from a number of sources. Some of the data comes from existing free sites. Most of the databases are based on published and unpublished CDs or rely on direct and indirect feeds by relevant courts, government departments and other organisations. All of the data has been converted into a consistent format and a generalised set of search and hypertext facilities added.

BAILII is currently appealing for funds to continue its work. Please go to the site and consider making a donation.

The Supreme Court replaced the House of Lords as the highest court in the United Kingdom in October 2009 so that the Supreme Court and its 12 Justices are now explicitly separate from both Government and Parliament. The Court hears appeals on arguable points of law of the greatest public importance, for the whole of the United Kingdom in civil cases, and for England, Wales and Northern Ireland in criminal cases. Additionally, it hears cases on devolution matters under the Scotland Act 1998, the Northern Ireland Act 1988 and the Government of Wales Act 2006.

The Supreme Court sits in the former Middlesex Guildhall, on the western side of Parliament Square, which has been extensively remodelled to provide the facilities needed (which are very high tech incidentally).

There is lots of information on the site on the history, role and processes of the Supreme Court. Decided Cases are published on the site in pdf form after the Judgments are handed down both in a “press summary” (effectively a case report) and in full. The judgments on the site can be sorted in ascending or descending order of hand-down date, neutral citation, case ID or case name or can be searched for by ID number or by keywords. Judgments are also made available on BAILII.

Current Awareness from the Inner Temple Library provides up-to-date information on new case law, changes in legislation and legal news related to these topics. The content is selected and updated daily by information professionals on the staff of the Inner Temple Library in London. Amongst other things, it provides a very user friendly (but authoritative) summary of key cases each day drawn from other sources, including BAILII. A full list of sources is provided and the information is fully categorised.

Earlier decisions can be found on the previous website under “Judicial Committee”. (The Privy Council itself has not moved to the Supreme Court building, only the Judicial part). 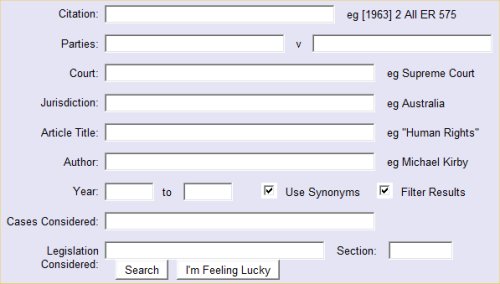 LawCite comes from the family of Legal Information Institutes (LIIs) of which BAILII is one. It is an automatically-generated international legal case citator, used to locate judgments and to see how these have been subsequently dealt with and commented upon – perhaps throughout the world. Since LawCite was developed by the LIIs, it has a particularly international element. Over 15,000 law report and journal series are currently indexed with nearly 4 million cases and law journal articles in the database from around the world. The current emphasis is on common law countries, but this is being gradually extended to include civil law jurisdictions as well. It is automatically maintained (ie maintained by computer with no editorial involvement) and so is always up to date. New cases are generally available within 24 hours of publication on any collaborating LII and are then available via WorldLII.

JustCite is a UK-based multi-source legal search engine and citator service from independent publisher Justis. It is the only provider-neutral service that links to content from a range of publishers and includes extensive links to full-text material on leading online services, including BAILII, Casetrack, Informa Law, Justis, LexisNexis and WestLaw as well as to BAILII and legislation.gov.uk. See further the article on JustCite in this issue (page 5).

CaseCheck is an extensive free database of case summaries from the Supreme Court, the English and Welsh Courts, the Scottish Courts and the European courts. It also features legal articles, legal jobs, video interviews and case law search functionality. The site itself contains links to thousands of court cases directly from their associated case summaries and all articles are contained within a clearly defined and logical structure.

The Incorporated Council of Law Reporting (ICLR) is a legal charity that was set up in 1865. They publish law reports of the judicial decisions of the Superior and Appellate Courts in England and Wales. Most of their products are only provided by subscription but they do provide a free search process for their Case Summaries from 2009 onwards at cases.iclr.co.uk/Subscr/Search.aspx. You can sort the results by case name, publication reference, neutral citation or date of judgment by clicking on the relevant field header. This is a new version of the previous free service called Weekly Law Reports Daily, and before that, Daily Law Notes. A subscription is required for a wider search going back to 1865 or for the full case reports.

The Law Society Gazette provides recent cases reports covering a period of the last 6 weeks. You can view these at www.lawgazette.co.uk/lawreports or via the In Practice section.

(The other journals and newspapers publishing law reports all now seem to require a subscription.)

Delia Venables is joint editor of this Newsletter.