The end of print? – a law librarian’s view 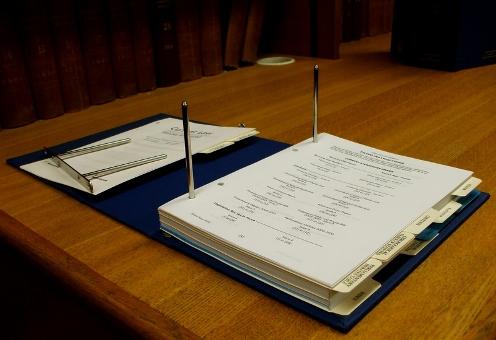 In the In the May/June issue, Nick Holmes suggested that particular types of print are under threat and he questioned whether ebooks were the future. In the last issue we published replies from three key law publishers. This time we provide a law librarian’s view.

Chris Hendry (Sweet & Maxwell, Thomson Reuters) and Cara Annett (LexisNexis) both argue that ebooks will enhance the reading experience of the user. I agree that this may be the case for some people, but I very much doubt it will be the only medium by which we want to read our books in ten years’ time. No matter how attractive an ebook looks on a tablet, and no matter all the enhancements, it is still not quite the same as flicking through pages as you initially scan the contents of a book. Masoud Gerami (Justis) takes a more measured approach and acknowledges that print and electronic will continue as two complementary media “for many years to come”. But that is not the reason why I am concerned. If publishers make a decision to stop book publishing based on cost of production/profit margin, the choice may be taken away from us before we realise it.

“Soon we’ll be able to hook into that library with whatever device we fancy”? Only if we have the funds to subscribe! Woe betide us if there is an end to print in legal publishing. The totally mistaken perception that legal research resources are all freely available on the internet still persists, and so paper copies are seen as obsolete. Many firms downsize physical collections and invest more and more in e-resources to meet the research requirements of the lawyers. But do they not realise the power that they are handing over to publishers, giving them a blank canvas on which to create pricing proposals that beggar belief? And these publishers are also hiking up the price of print to discourage us from keeping it, and to reduce their own overheads of book production. By way of example, one US series of law reports cost £50 per volume 3 years ago. It is now £240 per volume plus postage. And there are multiple volumes every year, depending on the number of cases heard in a jurisdiction.

A problem with the Durham Statement as I see it is that it says law schools should stop publishing law journals in print, and publish them digitally, free to air, on the web. So the law schools are hit two ways – no income from the print reviews (however meagre it might be), and the cost of digitising and storing the e-version.

When you work in a library service such as the Bodleian you start to appreciate that print is an enduring medium. In our law collection we hold the original bound English statutes, as published, back to the early sixteenth century. You open one of these volumes and the quality of the paper and print are such that the volumes appear new. With care and attention, these volumes have withstood the ravages of 500 years of use. 500 years!

In the digital world, we are currently into an iteration of information delivery that is 25 years old at best – the internet turned 20 recently – and in this time we have seen 5¼ inch floppy disks replaced by 3½ inch floppy disks; then there were the “miraculous” optical mass storage video disks that preceded the CD-ROM revolution: how many “dead” CD-ROMs with updates, chapters, books, legislation, do we have living (or dead) in cupboards in libraries?

Some stability has come about with the increasing sophistication and evolution of the internet, after the false starts of competing systems and browsers not being able to display the same data in the late 1990s. But we are still at the mercy of uncontrollable events such as: a subscribed website “going down” for technical reasons; unexpected electricity blackouts through adverse weather, overloaded grids, or sabotage; and the removal of databases from aggregated sites by publishers wanting to “do their own thing” (see my blog post on Slaw). Conversely, if a law publisher identifies a series as “unprofitable” they can stop publishing it electronically without a by-your-leave, and you no longer have access even to the years for which you subscribed. At least with a book, it remains accessible on the shelf even if the publisher goes bust, pulls the plug or disappears.

All I am saying is that we should hasten slowly. There is an expectation that libraries such as the Bodleian Law Library will always be able to provide paper versions when they are needed and will have the funding to continue to do this. This assumes two things. Firstly, that publishers will continue to produce the resources in paper. And secondly, that libraries have the funds to continue to pay the increased cost of paper in addition to the cost of the electronic databases. This is not the case, but people don’t think of that when they are cancelling their print and consigning back sets to the skips. Legal publishers could change the way some books are published in print – get rid of looseleafs for a start – but until reasonable pricing policies are in place for ebooks and for legal databases and publishers provide some form of creative commons licences to allow far wider access, it is dangerous to encourage the reduction of print publication. Publishers have different values from users because they are in business to improve their bottom line. It should not be an “either/or” argument. It should be possible to have both on offer at reasonable rates that reward the provider with a fair return, but do not impoverish customers coping with diminishing budgets.

Ruth Bird is the Bodleian Law Librarian. She has worked in two law firms in Australia as law librarian, practice development manager and knowledge manager, and was also law librarian at the University of Melbourne. She is passionate about the informational and teaching role of librarians, and the valuable service they provide in demystifying research and legal resources.

Note. The Bodleian Law Library is one of the Bodleian Libraries at the University of Oxford and holds the largest law collection in the UK. As a legal deposit library the Bodleian receives a copy of every title published in the UK, as well as actively collecting for dozens of other jurisdictions, and providing extensive e-resources.