The Justice site was launched in April 2011 as the government’s attempt to bring together all websites related to the UK justice system for the professional user. Initially it was a rather desperate attempt to patch together lots of different sites, all with different underlying architectures and different views of what they were trying to do and it was very difficult for the user to find what it was that they were looking for.

However, by the summer of 2012, a great deal of work has been done and we now have an attractive and well-designed site which covers the (very complicated) real life situation about as well as it could. After all, any website which made the British legal system appear simple, logical and straightforward would surely be an oversimplification!

Just as an aside, before we begin, the site justice.org.uk is an all-party law reform and human rights organisation, justice.com is a USA Findlaw site (now part of Thomson Reuters), justice.org is the American Association for Justice and justice.co.uk is an online jewellery shop so you have to be a bit careful what you type in!

There are several ways that the viewer can access the site, described in individual sections below.

There is a set of menu items at the top (News, Organisations, Publications, Courts, Tribunals etc); this is the “boring” way into the site, designed for people who know what they want. There is also a search box in the top right corner. 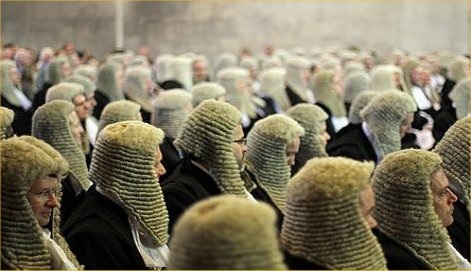 There is a large and quite striking news area at the top, rotating between 4 of the “big” current legal news stories, with a picture for each; these are ways of making the site feel interesting and accessible. The picture right relates to the story “Honorary QC nominations: period now open”.

Also in the top section, there is a list of the “Most popular” parts of the site, currently Procedure rules, Daily court lists, Prison finder, Court fees, Employment Tribunal guidance, Claims management regulation and Lasting Power of Attorney forms.

It is interesting to note that, despite the original intention to make this a site for professional users, it has in fact expanded to cover topics desired by “ordinary” people as well. Within the particular section provided, such as the Prison finder, and where additional information is available on the government’s DirectGov site, such as visiting someone in prison or family and friends of prisoners, the viewer is able to move smoothly to these additional resources. Similar links to other sites including Business Link, the Legal Services Commission and the Judiciary web site (all still separate websites) are also given, as appropriate. 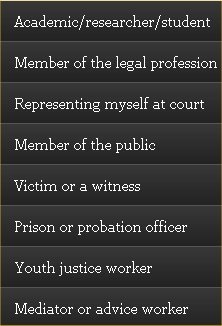 Another way of accessing the site is to start from the home page with who you are ”” here are options. As a “Member of the legal profession” you are then offered three options: Forms, Guidance and Contacts.

Forms are listed under Courts, Tribunals, Criminal injuries compensation and Mental Capacity Act. Most of the forms needed by applicants are available as pdf documents. You can fill them in online and print them off for your records, but you cannot save them (unless you have a full version of Adobe Acrobat), let alone submit them electronically. Presumably, this is a project for the future!

I am looking for …

This is another of the general sections on the home page. Options offered here are Court, Prison, Tribunal or Form, with appropriate further selections in each case by Region and name.

Continuing down the home page, you find recent press releases and statistics with a particular emphasis on statistics, which now appear to be coming thick and fast. There are also a number of reports and speeches relating to legal topics and (on occasion) videos of speeches available to you on YouTube and Flickr.

The designers of this website obviously have a problem here in that there are a modest number of major organisations but a myriad of smaller ones. If you take “Organisations” from the top menu, you are presented with about 25 of these, grouped in a logical manner, but also (on the right hand side) an option for “Full list of organisations”. If you take this you will be provided with an alphabetical list of organisations, large and small, of around 150. Not all the organisations have a link to further information but most already do; presumably, providing information on the others is also on the “to do list”.

The same problem ”” whether to list the few or the many ”” applies to “Topics”. At the bottom of the home page, you will find about 20 major topics listed, but the first of these is an option for an A-Z list which basically provides everything.

Whilst no site is ever perfect, the Justice site is an honourable attempt to provide information on the legal system for the many types of viewers who visit it ”” including the professional user.