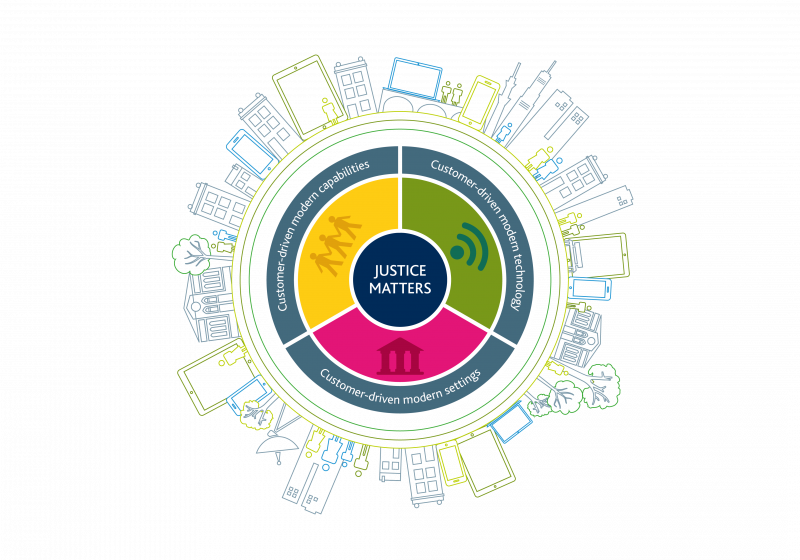 I don’t meet many people working in the justice system who disagree that we need to change, but people do often question whether we will be able to do what we have said we will, and whether our reforms will be implemented well and will work properly. They point to criminal justice or wider Government IT problems of the past to illustrate these worries.

As any successful project should, we are planning our work carefully and testing our own readiness regularly. But we are also doing some things in a radically different way from old-style Government projects. Most importantly, we are using an “agile” approach to digital development. This means building small components quickly and putting them to the test in the real world, iterating and improving them in response to feedback so that the systems really work for the people who use them.

It’s a method that helps with the balancing act between making sure we are being radical enough in taking the opportunity to do things differently, and making sure we are engaging with and listening to those with the expertise and know-how to make sure it works in practice. This approach has characterised more recent Government IT changes like the system for applying for your passport online. It also means we actively want your feedback – as much of it as possible – on the early versions of things we develop, so that we can make them better.

The main drawback is that sometimes the first version of something – the “minimum viable product” – can be disappointing compared to the eventual aim. For example, our early version of the new divorce service is “print and post” – just as the passport application service was when it was first launched. This may not feel very radical or digital; but starting fast and small lets us test things like how we make questions intelligible for people, and cut down the number of mistakes they make, before adding the next stage; and allows us to build pieces once that we can then use many times (for example, our “track my appeal” system, being tested for social security appeals, will be the basis for systems to track all kinds of cases easily). It also removes the risk that we build a giant monolithic white elephant which is perfect in our heads but doesn’t work when unleashed on the world.

What we’ve achieved so far

Here are some examples of the things we have done so far which (in my view at least) start to give us a track record and inspire confidence:

Our Crown Court Digital Case System has made working lives easier for court staff, judges and advocates, and given better “lines of sight” through the system, which cuts error and delay. I hear suggestions for improvement (we’ve got work on multi-handler under way) but have yet to meet anyone who thinks life was better without it.

Wi-Fi in the criminal courts now serves at least 55,000 legal professional users, helping them do their jobs better. At the end of 2016, we extended Wi-Fi to the civil, family and tribunal areas of 45 combined courts and we are now rolling out to all Civil and Family Courts and Tribunals, at very high bandwidth.

Help with Fees took a long and complex paper form and replaced it with an online service developed with the user in mind. We radically simplified what was asked, and replaced an invitation to send lots of paper evidence with an automatic link to DWP to check benefit eligibility. We went from an 80 per cent rejection rate (mostly because the old, complicated form was hard to fill in correctly) to closer to 20 per cent, and saved £1m. It’s a great example of how a well-designed digital route (with paper back-up for those that need it) can actually improve access to justice, even for potentially very vulnerable people. 87 per cent of users rate it “good” or “very good”.

The Common Platform Programme is creating an end-to-end system for crime that unites police, Crown Prosecution Service and HMCTS. This is now moving at pace. We have started rolling out “Digital Mark-Up” to every magistrates court. This gives legal advisers the ability to “result” most cases directly in court (rather than writing longhand into a paper file in court, and passing the paper to an admin team to result later by typing it into the system). We’ve also successfully launched a system to pull Transport for London (TfL) fare evasion cases directly into our systems, allowing magistrates to deal with them very rapidly, and result them automatically. 350 cases a week are now being dealt with entirely end-to-end through this system, and we will now add TV licensing and DVLA cases, followed by police prosecutions for things like speeding.

The first digital release of the “main” Common Platform – a true shared system between police, CPS and HMCTS that will let cases travel and be worked on through the system seamlessly – is now live with police and Crown Prosecution Service users in Mersey-Cheshire. This first slice of the system allows the CPS direct access to all the necessary material to review a case and make an initial decision online. A second release will allow cases to pass through into the early stages of the court process. It’s been at least a decade since I was first involved in conversations about this kind of end-to-end system, so it really is remarkable to watch it starting to be used on real cases.

Online applications for divorce and probate are being trialled with the public, who have given extremely good feedback. We’re offering those who ring up to ask about the progress of their social security or child support appeal the option of tracking their case online and getting text alerts in real time – testing a system which we can later expand to cover all types of cases. We’ve also started the development of the online court, which will genuinely transform access to justice, and put us in the international vanguard. The first step is the development of a system for issuing and responding to civil money claims online; that’s also been launched for trial use by real people, on real disputes, over the summer; and the test version for legal professional users is also now live. We’ll add the facility for people to seek and reach agreement with each other through the system next.

In June, we launched – not as a pilot, but as a full system available to anyone – a tax appeals service that allows people to lodge their appeal online. So far we’ve seen over 2,300 people use the online appeals service, with almost 700 appeals made – very rapid take up in just three months.

We’re also changing the way we support these new systems, and help people use them. For example, we are bringing together all our telephone-answering on divorce in Loughborough – the new set-up is already handling around 700 calls a day, answering well and promptly (currently within around ten seconds). Staff are using a new phone system that – unlike our old one – allows for easier feedback, training, and links between what’s being discussed on the phone and what advisers can see about a case on their screens. We’re doing something similar with telephone support for the Single Justice Service.

Finally, jurors summoned for Preston Crown Court are the first in England and Wales to be able to respond online. Jurors can respond on a phone, tablet or computer (and of course there is still a paper route available for those that want it). It’s early days but it looks as though – not all that surprisingly – we’re getting better and faster responses having given some easier ways to reply.

In summary – we have been busy. We’ve done far more than most people expected in what has, in truth, been less than a year of full running of the reform programme. Great credit is due to those who work in courts and tribunals every day who have helped design, test, and test again the new systems and ways of working. Our thoughtful, committed judicial partners have also been close to every bit of this – and we are also grateful to the many hundreds of litigants, applicants, jurors, legal professionals and others with whom we tested early versions well before these much wider beta versions.

At the start of our reform programme we set ourselves a stretching list of things to have done by September 2017; and we are doing extremely well against that list. But, of course, this is still just the start. There’s more work to do on each of the things we are testing now; and we are also standing up new projects all the time (including the work on scheduling and listing I mentioned in my most recent blog; and work on family law trailed in the messages sent out about e-filing and e-bundling). The next set of projects are in many ways more complex than the first set; and need wider dialogue and engagement to be delivered well.

If you want to know more, or tell us what you think, you can follow the Inside HMCTS Blog or sign up to attend one of a series of HMCTS roadshow events for members of the legal profession.