Home » Law publishers » JustCite ”” an umbrella index of the law

JustCite ”” an umbrella index of the law

In the early 1990s Justis Publishing provided electronic access to the Law Reports, Weekly Law Reports and other series. The first to do so, it still supplies online cases and legislation on its full-text Justis legal library.

But the company saw how an aspect of Justis could be expanded into a new service: one that would ultimately span the competition that was beginning to emerge, and help lawyers digest this proliferation of online legal material.

By 2001 Justis included pictorial representations of the relationships between cases but these were confined to reports in the same series.

So in 2002 the JustCite citator was launched to bridge the gap between series. Indexing a wide variety of case law and legislation, it joined the more established citators on the market in offering a time-saving solution to the problem of establishing the current status of law.

However, by 2003 it was clear to Justis Publishing that a citator alone was insufficient, so two important decisions were made.

The first was to link to different resources from JustCite, even those competing with Justis. So for each citation, a dropdown menu would offer a choice of hyperlinks to full-text documents, bypassing separate search platforms and taking users directly into that full text. During this process, the company coined the now oft-used phrase “provider-neutral” to describe its citator.

The second decision was to undertake a systematic and continuing project to enhance the depth and breadth of the law indexed by JustCite.

In 2009, there are now 20,000 active users of JustCite and nearly two million records contained in it.

Creating an up-to-date snapshot on the fly

JustCite’s case records include case names, parallel citations, cases judicially considered, subsequent cases and lists of journal articles that discuss them. Crucially, each record shows how each case was cited and whether its precedent is still good law. Legislation records include amendment trails and lists of cases that interpret the legislation. A good example from the famous McAlister (or Donoghue) v Stevenson case can be seen at www.justcite.com/dssample.

Each record has two types of link: green links change the view to the record of any document listed, while blue links offer the aforementioned dropdown menus. These can be customised to “grey out” services you don’t subscribe to, avoiding disappointment and frustration for end users.

Basic searching is straightforward on JustCite, so most users can get results unaided. However, the interface allows more advanced users to construct complex queries if needed.

In all, JustCite covers information from 88 publishers and that number is set to increase substantially over the coming years, with around 10,000 records being added every week. Some information is streamed directly from publishers and modified by the company’s legally qualified in-house editors but increasingly the editors write much of the material that is unique to JustCite themselves.

A good example of this is “JustCite Digest”. A component of records for UK cases from 2007 onwards which is set to expand in the coming years, each Digest provides a concise summary of the case, quickly indicating whether further investigation might be fruitful.

Competition and the future

Other citators strive for similar levels of coverage, some succeeding. The most prominent is WorldLII’s LawCite. Though useful, LawCite differs in several important areas: its update frequency is at best every four weeks, based on my check at the time of writing; its data and search manipulation is more basic; and links to full-text material provide less choice. But most Importantly, LawCite is derived mainly from automated processing of the information it covers, so is less likely to achieve the richness of information for which JustCite strives.

Other high-profile information providers are keen to get involved with JustCite. This is at least partly because JustCite complements their services rather than competing with them, as exemplified by LexisNexis’s recent decision to increase the number of their legal titles and series indexed on JustCite, and parallel moves by other large global legal publishers to allow deep linking to their platforms.

Others are impressed with JustCite’s underlying technology. Not only is this leading to a diversification of JustCite itself, spearheaded by the JustCite Tools range, but its protected technology is being adopted behind the scenes to help power a number of non-Justis Publishing services. One example of many is Tikit’s respected KnowHowSystem (KHS), which has recently used the JustCite API (application programming interface) to replace its authority file of case and legislation relationships with JustCite data. Users of the software at firms that adopt this option will now see JustCite information displayed at relevant points within the KHS environment they are used to.

Following is a section of a typical JustCite record, showing the dropdown menu from one of its citations to a selection of direct hyperlinks into third-party full-text material. Detailed link destinations have been obscured at originating publishers’ requests. 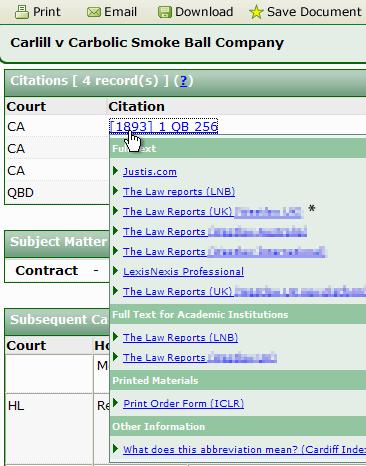