JustCite, the multijurisdictional citator from Justis, has been rebuilt from the ground up, with the new version released in December 2010. More recently it has been enhanced to incorporate details of barristers in England and Wales, cross-linked to their cases. But perhaps the biggest shift is that now the first page of JustCite results is available without sign in, so that non-subscribers can benefit from JustCite’s search results.

10 years ago, the Justis full-text online legal library included pictorial representations of the relationships between cases but these were confined to reports in the same series. So the following year the JustCite citator was launched to bridge the gap between series in a separate online service of its own. Indexing a wide variety of case law and legislation, it joined the more established citators on the market in offering a time-saving solution to the problem of establishing the current status of the law.

A year later, JustCite started to provide links to third-party resources. So for each citation, a dropdown menu would offer a choice of hyperlinks to full-text documents taking users directly into services they subscribe to such as Justis, Lawtel, LexisNexis and Westlaw, or to free resources like BAILII and legislation.gov.uk.

JustCite’s re-engineered algorithms consider the relationship cases have with each other and their relative importance. So when you search for a phrase, case name, citation or any other query, your results are ranked as if selected by legal experts for true relevance, not by a machine arranging them by keyword frequency. Indeed, the legally qualified team of JustCite editors plays a part in selecting the most important material to cross-reference within case and legislation records.

Testing this is the best way to understand it. Until the public switchover on www.justcite.com has been made later this year, visit new.justcite.com. Once there, you can test the efficacy of JustCite’s search with subject terms relevant to your practice area. A good example is of “duty of care”, which ranks Donoghue v Stevenson at the top, given the number of positive subsequent citations it has enjoyed; lesser citators would return more arbitrary cases that happen to contain more occurrences of those keywords in their meta-data.

Note that the free JustCite service extends only to the first page of results; all views deeper within are restricted to subscribers. More on this can be found in the JustCite Knowledge Base.

The results pages now comprise “profile cards”, which contain snapshots of information, such as a case name, its citation and the number of reported positive, negative and neutral treatments. Fine-tuned by the editorial team, these help determine the validity and importance of the item in question, and – along with the algorithms – where it is ranked in the results pages.

If you don’t find what you want, you can easily refine your search. Then, once you’ve identified a document that demands further attention, subscribers can click through to it.

As with the old JustCite, the citator’s case records include case names, parallel citations, cases judicially considered, subsequent cases and lists of journal articles that discuss them. Crucially, each record shows how each case was cited ”” with links to change the focus to that case ”” and whether its precedent is still “good law”. Legislation records include amendment trails and lists of cases that interpret the legislation.

The new layout is designed for maximum clarity, providing a more detailed snapshot and separating the screen into digestible sections and click-throughs. 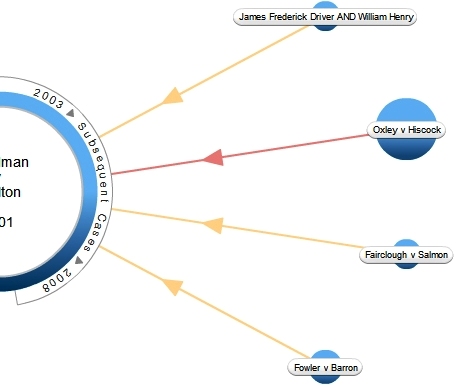 Following the launch of the new service, with the emphasis on visual clarity, work started on exploiting the hard-coded relationships that were established to drive the search engine. The result is a new visualisation tool, the JustCite Precedent Map.

The Precedent Map seeks to mirror and expedite a user’s thought processes when searching for material on a citator. To do so, it produces a diagram comprising the case in question in the middle of the screen, orbited by nodes of varying sizes of cases that it cited or subsequent cases that cited it. The size of node is determined by the number of citations shared with the central case, and a coloured arrow indicates the positive, negative or neutral effect each case had on the other. Within that view, users can hover over other nodes, which auto-generates arrows into that node, enabling a decision on whether clicking through to that case would be fruitful. Hovering over the central case will produce an overlay providing further details about the case, including keywords, legislation cited and related articles.

There is a full walk-through of the Precedent Map features on the JustCite Help pages.

The weekly addition of around 10,000 new case, legislation and article records continues apace, some streamed directly from data partners, much of it editorially vetted. But new arrangements with providers from around the world has seen JustCite index material from new territories in the Caribbean and important new series in longer established territories, such as the UK, Ireland, Australia, Canada and Singapore.

However, perhaps the most innovative content development is the addition of profiles of 11,500 practitioners from the Bar of England and Wales. By linking to their profiles from their representative cases and to their cases from their profiles, solicitors are provided with a short cut not just to other relevant precedent but to the barristers they might want to instruct in similar cases.

The JustCite team is in the process of creating a bank of continually updated meta-data to feed to search engines. This will allow Google and the like access to enough material for its users to ”” knowingly or otherwise ”” search JustCite’s higher-level content. For citatory purposes, Google’s search mechanism is less refined than JustCite’s own search engine. But over time, the popular searches on Google should weight significant cases in the way that JustCite’s inbuilt systems weigh them. This is an important move for free and easily searchable access to legal data.

Within a quality-controlled environment, more functionality will be incorporated to allow registered barristers to enhance their presence on JustCite over the coming months, a move in its infancy but one that could pave the way for other areas of user-generated content on JustCite.

More about JustCite can be found via the JustCite Knowledge Base.