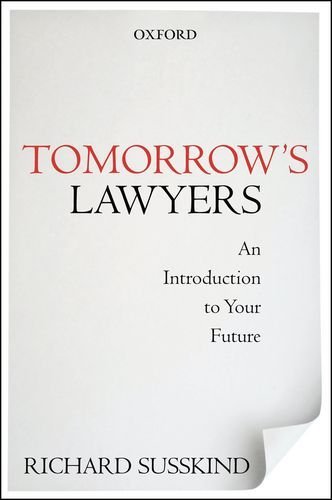 Tomorrow’s Lawyers: An Introduction to Your Future is a new book by Richard Susskind, published by Oxford University Press, January 2013.

It is smaller and more compact than Richard’s previous books and inexpensive (in paperback at £9.99) but contains the condensed and assimilated wisdom of one of the most important thinkers that we have about the way that legal services are changing and will be delivered in the years to come.

The book is in three parts. The first offers an updated restatement of Richard’s views on the future of legal services. This was broadly the topic of his first book, The Future of Law, which came out in 1996, and which described the overwhelming (and disruptive) changes which he foresaw in the way that Law would be practised and delivered in the years to come. He has brought his body of thought up to date every few years since then, most recently in The End of Lawyers? in 2008 but he now presents it in a newly burnished form in Tomorrow’s Lawyers.

The second part looks at the new legal landscape – what legal firms will look like, the role of in-house lawyers, the new ways in which legal services will be provided and how all this affects the citizen’s access to law.

He is by no means uniformly pessimistic about this – he sees legal knowledge and advice being provided in many new ways, many of them online, at the same time as some of the older ways (one to one legal advice) become less viable.

In this section, he looks at what the new legal jobs will be like, who will employ young lawyers, how they should be trained and (very importantly) the questions which these same young lawyers should be asking of their future employers.

The book is very direct, compact and easy to read, even if assimilating the ideas in it may take a little longer! You may not always agree with Richard’s ideas but you cannot, surely, think that he is asking the wrong questions! Make it your new year’s resolution to read this book.

Review by Delia Venables, joint editor of the Newsletter.

Professor Richard Susskind OBE is an author, speaker, and independent adviser to major professional firms and to national governments. His main area of expertise is the future of professional service, with particular reference to information technology. He has worked on legal technology for over 30 years.

One thought on “Tomorrow’s Lawyers”