Home » Cryptocurrencies » What is Bitcoin?

Bitcoin refers to a type of digital currency known as a cryptocurrency, as well as the peer-to-peer system on which it relies. Bitcoin describes itself as “an innovative payment network and a new kind of money”.

Cryptocurrencies are based on principles of cryptography and generally entail complicated mathematical equations which need to be solved in order to generate each unit of the currency (such as a bitcoin). The number of potential units is finite and it’s extremely difficult to manipulate the speed at which the currency units are created. In theory this inherent system of control should make cryptocurrencies more stable than traditional currencies which are subject to radical government manipulation, such as through quantitative easing (printing money) which naturally leads to inflation as the currency quickly becomes less valuable.

Following Edward Snowden’s NSA revelations, many people have become rather distrustful of governments and corporations which feed private information to public sector spies and result in unwanted intrusions into their personal lives.

The use of Bitcoin allows a far higher degree of privacy as it operates outside the regulated banking sector and doesn’t require record keeping.

Cutting out the middle man

Relying on banks for transactions can often be slow and complicated, particularly where international business is involved. Although making online payments is much faster than it used to be, often it still takes extra time for funds to clear which essentially allows banks to make money on the interest from your money while it passes through their system. Bitcoin transactions are instantaneous and the equivalent of clearing can be viewed in real time and shouldn’t take more than about an hour.

Theoretically Bitcoin and other cryptocurrencies should be more stable than traditional currencies because their units are limited in number and the rate of production cannot be overridden. However, just as with other currencies, they are prone to speculation and, in recent years, their value has fluctuated wildly. In other words, the number of bitcoins in circulation may be hard to manipulate, but the value that people give to the bitcoin unit is open to the pressures of supply and demand.

If you would like to pay for goods or services using bitcoins – or offer this as a payment method for your own business – all you need is a compatible digital wallet. This is a piece of software which handles the encryption of payments using public and private keys.

What are public and private keys?

1. John wants to send Mike a ruby in the post.
2. Mike sends John a safety deposit box containing an unlocked padlock.
3. John puts the ruby in the box with his own unlocked padlock.
4. John locks the box with Mike’s padlock and sends it through the post.
5. It arrives and Mike uses his private key to open his padlock.
6. Mike examines the ruby and wants to send cash as payment, so he places the money in the box and locks it with John’s padlock.
7. It arrives and John uses his private key to open his padlock.

In terms of Bitcoin and other cryptocurrencies, the padlock is known as the “public key” and the private key is just that, a “private key”. Furthermore, the keys are very large numbers.

There is a whole range of digital wallets compatible with Bitcoin but one of the easiest to get started with is Multibit (for Windows, MacOS and Linux) – it’s also completely free. The Bitcoin Wallet can be used with Android phones which take advantage of QR code technology, allowing you to pay for purchases when you’re out and about. However, Apple has now blocked all Bitcoin wallets from its App Store, to the consternation of iPhone users.

Once you have set up your digital wallet, you can use this to send or receive Bitcoin payments. If you would like to buy some bitcoins with pound sterling, you can use a number of Bitcoin exchange services such as Bittlylicious. The first Bitcoin ATM in the UK recently opened in Tech City.

If you want to accept Bitcoin payment for your business, you can either do this directly using your digital wallet or you can make use of a range of merchant services. Or you can also choose to convert your bitcoins to pounds by using a Bitcoin exchange such as Bitstamp.

What are the risks?

Since Bitcoin was introduced in 2009, it went from being a virtually unknown technical experiment to a darling of financial speculators – and then experiencing a financial car crash. The volatility of the currency has prompted warnings from the research unit of Goldman Sachs. The reason for this roller-coaster effect may be largely down to the experimental nature of Bitcoin and the fact that it’s such a new form of currency.

Furthermore, controls placed on the use of Bitcoin – such as the China’s clampdown on cryptocurrencies – are certainly a major cause. On the other hand, other world currencies can be volatile as well!

Just as with any banking system, the various processes which enable Bitcoin transactions are vulnerable to theft in the form of malicious hacking. Mr Gox, formerly the world’s biggest Bitcoin exchange filed for bankruptcy in February 2014 after “losing” around 850,000 bitcoins, prompting a drop in the value of bitcoins. It still remains unclear as to whether this loss was the result of theft, fraud, mismanagement or a combination thereof. A group of investors is now seeking to purchase the bankrupt company for a token payment of one bitcoin. On a practical level, it’s important to keep your digital wallet password-protected and backed up.

The alternatives to Bitcoin and the future of cryptocurrency

Bitcoin may be the most well-known cryptocurrency but it’s certainly not the only one. There were around 60 alternatives towards the end of 2013 such as Litecoin and new entrant Dogecoin. The latter is geared towards tipping and “fun” and its creator, Billy Markus, recently said: “The Dogecoin community is unique in my experience because at least at the moment it’s about fun and using the coin for fun purposes and tipping …”.

Whatever happens to Bitcoin, it’s unlikely that cryptocurrencies are going to disappear any time soon.

The Guardian’s John Naughton provides a useful analysis “Bitcoin may bite the dust, but the notion of a digital currency will endure” at http://bit.ly/1u8T6Yr.

The banking sector is often perceived as greedy, incompetent and needlessly bureaucratic and many people are trying to cut out this unpopular middle man. Just as DIY law has gradually become more popular with the increasing availability of technological solutions, it looks like the same effect may be seen in the banking sector. 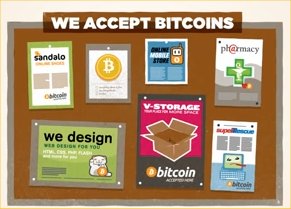 A Texas-based criminal defence lawyer started accepting Bitcoin payments in 2013, explaining that his clients “want to keep things as discreet as possible”. The implication here is that, since Bitcoin does not leave a “trail” of information, there could be uses (good and bad) for the anonymous nature of the currency.

From the firm’s point of view, he suggested that accepting Bitcoin was no riskier than accepting other forms of payment, either in terms of money laundering or getting paid. The firm also advises Bitcoin exchanges, Bitcoin miners and businesses accepting payment in Bitcoin.

At present, deciding whether to offer Bitcoin payments at your firm may be more about image and marketing than practicality. If your client base is tech-savvy they will no doubt appreciate this option, even if they don’t actually use it. On the other hand, it could engender a more risky and rebellious aura which may put off a more traditional demographic. So ensure that you consider how your firm will be perceived by the majority of clients before taking a decision to embrace the Bitcoin era.

Alex Heshmaty is a law graduate, a legal writer and a legal technology specialist with over 10 years’ experience working within the legal publishing and IT sectors. His previous roles have included legal writing, editorial and research, web design, marketing and account management. He runs Legal Techie, a copywriting, SEO and online marketing consultancy, providing a range of services for the legal sector.

One thought on “What is Bitcoin?”