The use of social media in a workplace setting has gained increasing prominence alongside the rise of the internet-enabled office. Social media pervades the working day, and, whilst a number of employers have sought to limit its use during working hours, its mobile nature, accessible via smartphone or tablet, means that seeking to do so is a Sisyphean task.

Social media also gives rise to a significant new medium through which employers can find themselves in difficulties. A disgruntled employee can easily and swiftly cause reputational damage through social media posts; a company can be irreparably damaged by the exposure to ridicule that this causes.

It is notable that the traditional media now increasingly utilise social media posts, particularly Twitter, to generate both stories and leads, such as the recent highlighting of victims of fraud following the TalkTalk hacking, many of whom were approached following the posting of Tweets relating to their experiences.

Individual reputations can also be tarnished through injudicious use of social media, but it can be a two-way street. A case in point is that of Charlotte Proudman, the junior barrister who found herself at the centre of a media storm following her publication on Twitter of a message that she had received from a senior solicitor, Alexander Carter-Silk, via the professional social media website LinkedIn. The story received widespread attention, but the facts can be summarised shortly.

Ms Proudman was a member of LinkedIn, which is billed as a social media site allowing professionals to connect. She either sent a request to Mr Carter-Silk to connect with him, he also being a member of the site, or vice-versa – the reports in this regard are unclear. LinkedIn works by allowing individuals who do not necessarily know each other but who have profiles to connect to each other’s network. It also suggests potential connections based upon degrees of connection with existing connections. Messages between connections are ordinarily private, contrasting with posts made on the forum, which are available to all connections.

Mr Carter-Silk responded. However, fatefully, he added a personal message, as follows:

“Charlotte, delighted to connect, I appreciate that this is probably horrendously politically incorrect but that is a stunning picture!!!”

Ms Proudman, it appears, took exception to this message, and took the decision to publicise the same via Twitter, contending that Mr Carter-Silk had behaved in a sexist manner. She tweeted the message sent by Mr Carter-Silk and her response, in which she stated that she was on “linked-in [sic] for business purposes” and that the response was “unacceptable and misogynistic behaviour”.

Whilst the above episode has received widespread media attention, and has almost certainly caused severe embarrassment to all concerned, including Brown Rudnick, the firm at which Mr Carter-Silk is a partner, that appears to be as far as the episode has gone. However it demonstrates the ease with which social media can be used for purposes which inadvertently or not can cause offence. The message sent by Mr Carter-Silk was certainly ill-advised, and arguably sexist. What should be of concern for employers is the level of attention that the story attracted. This may in part be due to the nature of the protagonists; the older, married solicitor, and the younger, female barrister. That said, the attention given by the media to this incident demonstrates the real risk to reputation to which a private comment made over social media can give rise.

This risk is one which all employers should be aware of. In our recently published book, Social Media in the Workplace: A Handbook, we stress above all the need for clear policies to be put in place regarding the use of social media sites by employees, both during working hours and in their own time. The risks arising out of social media misuse can have significant consequences for employers. Examples include social media harassment, whereby a course of conduct which causes an employee (or third party) alarm or distress is pursued by another employee, with the potential for vicarious liability arising if the social media misuse is closely connected to employment; or claims for defamation; or, potentially, criminal prosecution of employees. Even if liability of the employer is avoided, the reputational damage is likely to be significant.

The crucial first step is to ensure that appropriate social media usage policies are put into place and that staff are appropriately trained as to their ambit. It is incumbent upon all employers to ensure, insofar as is possible, that their staff are aware that their posts on social media outlets, ranging from the professional-orientated sites such as LinkedIn to the more informal such as Twitter or Facebook, can affect their employment.

Had Mr Carter-Silk’s comment been more than simply inappropriate, it is highly likely that his employer would have wished to distance itself from his behaviour, by invoking a disciplinary process. In the absence of a policy, such a process would potentially be open to challenge and any dismissal arising out of it potentially unfair.

There is variable case law arising out of social media dismissals, and the absence of a policy is not necessarily fatal. In Teggart v TeleTech [2012] NIIT 00704_11IT (a Northern Ireland case) the Claimant was dismissed for gross misconduct after posting obscene and sexual comments about a fellow work colleague on Facebook. The Tribunal held that the dismissal was fair despite the Respondent’s policy not expressly covering personal use of website. But in Witham v Club 24 Limited, trading as Ventura 1810462/2010 an employer was concerned over comments made by the Claimant on Facebook and their impact on its relationship with its major client. The company handbook said posting inappropriate comments on Facebook constituted misconduct. The dismissal was found to be unfair as whilst the comments were misconduct, the employer did not consider alternatives such as demotion. Had the policy expressly spelled out the consequences of such behaviour, the result may well have been different.

Employment Tribunals have stressed that there is no special rule when considering dismissals arising out of social media usage. In Game Retail v Laws [2014] UKEAT 0188_14_0311 (3 November 2014), the first appellate tribunal case involving Twitter misuse, the EAT applied the traditional principles of misconduct. The EAT confirmed that private usage of a social media account was not an irrelevant question and that there is a balance to be drawn between the desire of the employer to remove or reduce reputational risk and the right to freedom of expression. “Generally speaking”, said the EAT, “employees must have the right to express themselves, providing it does not infringe on their employment and/or is outside the work context. That said, we recognise that those questions might themselves depend on the particular employment or work in question”. Given the importance of balancing freedom of expression as against harm to an employer, it is important that policies are put in place to ensure as far as possible that an employer seeking to take action has set out the consequences of social media usage.

Whilst ordinary employment law principles will apply to social media dismissals, one of the key importances of a clearly written and tailored policy is its applicability to the consideration of reasonableness pursuant to section 98(4) of the Employment Rights Act 1996. Where an employer has clearly envisaged the risk to reputation arising out of unwise social media usage, it is likely to be far easier to justify a dismissal. Depending on the social media policy (if any) deployed by Brown Rudnick, Mr Carter-Silk could quite easily have found himself being fairly dismissed following the release of his comment, relatively low-level that it was, if he was aware that there was a no-tolerance policy to inappropriate behaviour even in private over social media where the same could cause harm to his employer.

What the Proudman incident highlights in particular is how quickly matters can be blown up beyond their initial scope and remit. Private posts or emails can be publicised by screenshots being posted on open social media fora. Once an ill-judged message is released into Cyberspace, it is almost impossible to remove, as control has been ceded. There is growing jurisprudence relating to the inter-relation of private and public social media; for example in Preece v JD Wethersoons plc a Pub manager was dismissed for writing derogatory comments about abusive customers despite a “shocking torrent of verbal abuse and physical threats” from the customers; the Claimant’s belief that her comments were private owing to her mistaken belief over her Facebook privacy settings was irrelevant as the policy of the employer expressly dealt with the use of social media. Despite Mr Carter-Silk’s message having been private, and presumably being intended to remain so, Ms Proudman chose to release it into the public domain. Employers need to ensure that their employees are aware of the risk that anything they post, regardless of their privacy settings, may find its way into the open; and should likewise be made aware of the potential consequences to the reputation of their employer and as a result to their continued employment, should the same occur. 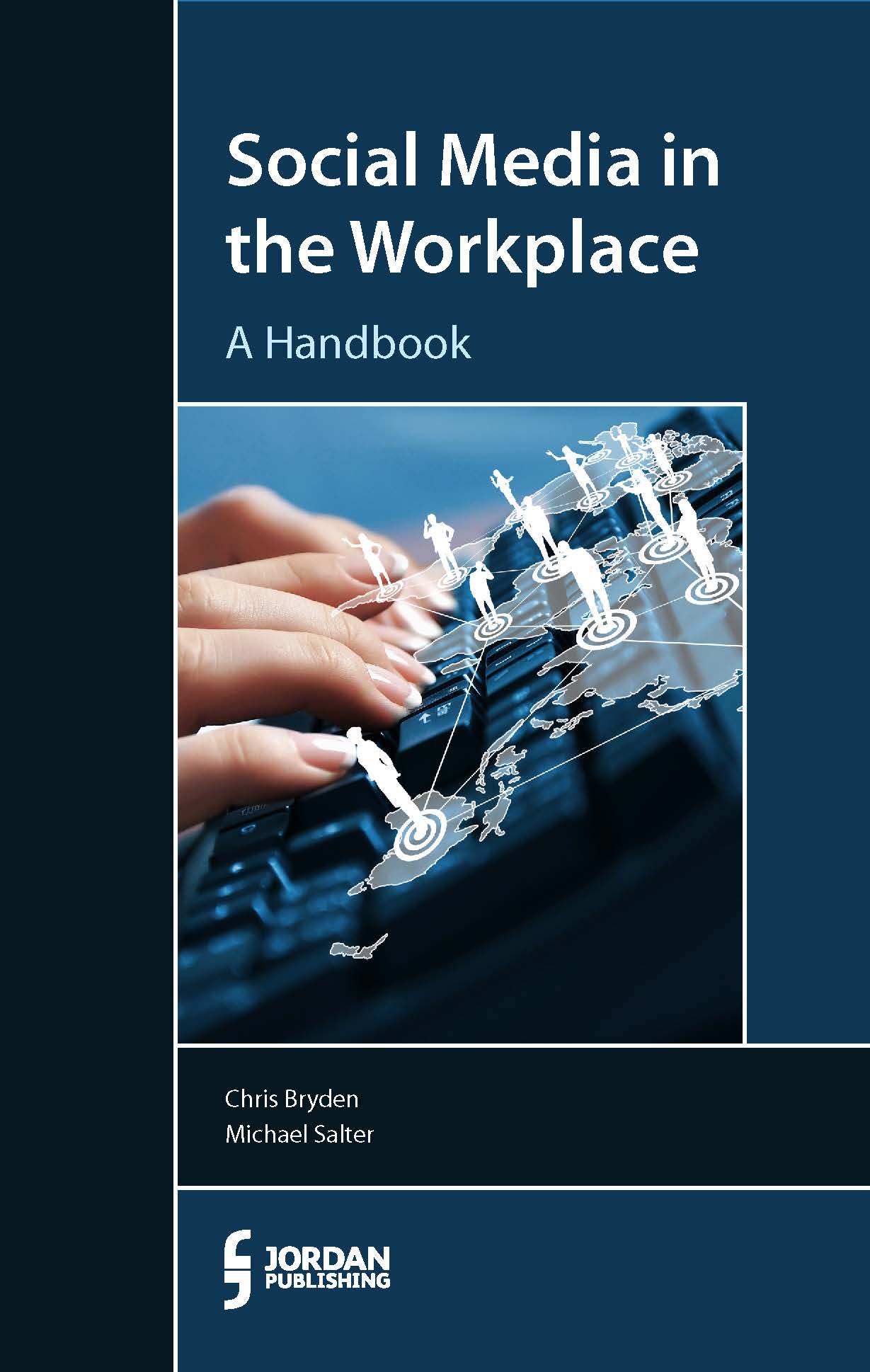 Social Media in the Workplace (Jordans, £65) provides an overview of the various legal issues that can arise in the workplace through the use and application of social media. It is intended as a handbook for advisors to employers.