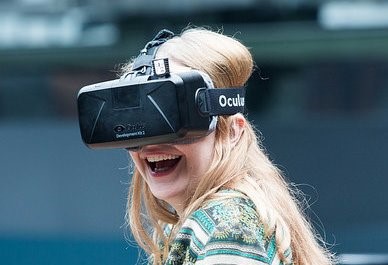 The basic idea of virtual reality (VR) is to create a computer generated environment which someone can experience and explore, through the use of a headset (incorporating vision and sound) and sometimes other input devices (eg haptic gloves) which allow them to manipulate their virtual surroundings. The concept of a computer simulated reality is nothing new and experiments with VR systems were already being carried out in the late 60s (eg The Sword of Damocles). Advances in technology during the late 80s and early 90s led to an increasing cultural awareness of VR through films such as Lawnmower Man – and the rise of computer games prompted more companies to attempt to create a device which could be used in the same way as a home console. But progress was slow, with a trailblazing attempt by Sega in 1993 terminated, officially due to fears that users could injure themselves by moving around due to the “reality” of the headset (although perhaps more to do with limited processing power and reports of testers developing headaches and motion sickness). However, although it struggled to take off as a consumer device, VR systems have been used for many years for training in certain professions: teaching pilots to fly, police officers to shoot and surgeons to operate.

Why is VR important now?

There has recently been a resurgence in virtual reality, largely due to the capability and affordability of processing power which can handle the requirements necessary to create an enjoyable virtual experience. Playstation and Google both launched VR gaming systems in late 2016 to complement the PS4 console and Pixel phone respectively. Facebook owned Oculus Rift and HTC are also competing in the VR space. With these big players investing resources to bring computer generated gaming environments to the consumer market, this could be a turning point for VR.

As well as pure gaming, VR is also being used for the “gamification” of training. VR lends itself very well to this idea of making training fun. One learning simulation making use of the Oculus Rift system is helping law students at the University of Westminster get to grips with criminal law. VR could also be used in the professional training of lawyers, either to achieve learning outcomes or to navigate a courtroom. Aside from training, VR could potentially be used to create virtual courtrooms so that evidence can be given by witnesses remotely.

It’s also worth pointing out that augmented reality (AR) – which is related but distinct to VR – has already had a commercial breakthrough recently with the Pokemon Go craze. This raised various novel legal issues, some of which may also apply to VR.

As previously mentioned, the side effects of earlier VR attempts were headaches and “virtual motion” sickness. The new wave of VR seems to be afflicted with similar issues, with some journalists suffering what has been described as “simulator sickness” – although many people appear to be completely unaffected. Games manufacturers may need to provide warnings to users of their VR offerings about the potential for headaches and sickness – similar to the now-ubiquitous epilepsy warnings; Playstation is already doing so.

When Sega abandoned its initial stab at VR, it cited fears of personal injury. With more realistic computer generated environments, the possibility of a user falling over is far greater – as demonstrated by one gamer enthusiastically climbing a virtual rock face. The fact that visual and aural senses of one’s immediate environment are essentially blocked by a VR headset means that users are particularly vulnerable. Nintendo has already had to contend with safety criticisms and litigation in relation to its Wiimotes and the potential for its immersive gaming system to cause damage.

The Pokemon Go fad also raised issues of product liability, particularly in relation to the distraction of players who were more focused on the augmented reality on their phones rather than the actual reality of their surroundings, and consequently walked (or drove) around in a zombie-like state, causing accidents or entering dangerous locations. In this respect, VR is safer than AR, because it is generally designed to be played in a static location, but the issues of distraction and decreased spatial awareness still need to be tackled.

As with most computer software, VR systems have the capability to store and process substantial amounts of private individual data. However, beyond the standard types of captured data, the use of a virtual reality headset in conjunction with other input devices can potentially access far more personal data. Reaction times to in-game events, dexterity and ease of movement could build up a health profile of individual users. Eye tracking technology (such as that available in the Fove VR headset) is far more intrusive than cookies or click-tracking and is one step closer to thought-monitoring and all the dystopian Orwellian fears that accompany this concept.

The forthcoming GDPR and potential of eye watering fines for data protection breaches means that VR hardware manufacturers and software developers need to ensure privacy guards are in place for consumers and that all data is processed and stored securely and only used if permission has been explicitly given.

The amount of technology – both hardware and software – that goes into developing VR systems inevitably means that intellectual property plays a big part in commercial agreements and disputes. Patents will be held on the various unique capabilities of headsets, VR gloves and other input devices. Software may be protected under patents and copyright.

However, the spectre of virtual worlds also heralds the prospect of users adding their own creations and enhancing their virtual environments with user generated content. Although terms of use will often seek to strip users of any copyright in content they generate, the personal nature of virtual worlds will likely mean that this area of law needs to be revisited.

Harbottle & Lewis: VR: Not all legal plain sailing ahead