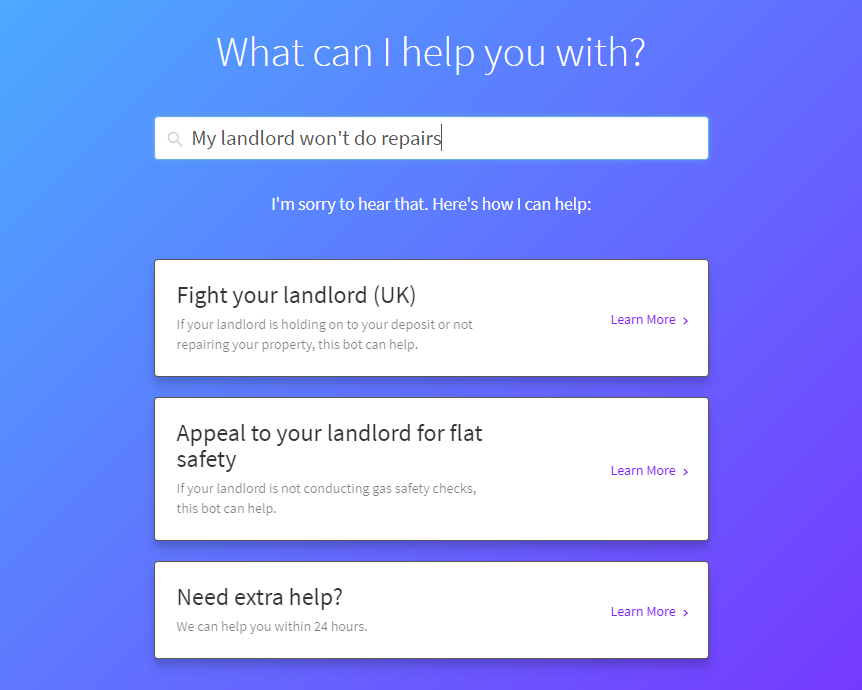 In this issue Casey Flaherty forcefully makes the case against the hype surrounding AI and robots in legal, particularly by vendors talking up their own offerings. He is also somewhat sensitive to those who call their offerings “lawyers” when they clearly are not. One such, indeed the one who has claimed “the world’s first robot lawyer” is all-of-20 Joshua Browder, a British student at Stanford University, majoring in Economics and Computer Science. Most of the legal tech press has covered the basics of Joshua’s DoNotPay robot lawyer which started off challenging parking tickets for Joshua and his friends and has now developed into a veritable bot-fest, with over 500 law bots planned in 300 areas of law across US, Canadian and UK jurisdictions.

Joshua has no legal background; he was just a geeky student who had picked up more parking tickets than he could afford to pay and figured out an effective way to challenge them. So he carries no legal baggage, just an infectious enthusiasm and a desire to save the masses from “lawyers exploiting human misery”. Expanding on this, he says: “it seems that the only people benefiting from injustice are a handful of lawyers. I hope that DoNotPay, by helping with these issues and many more, will ultimately give everyone the same legal power as the richest in society.”

This no doubt sounds incredibly naïve and OTT to the sceptical lawyer, but Joshua is smart and perceptive and it is worth digging deeper to see why we should take him seriously.

The most revealing media coverage I have encountered to date are interviews with him, firstly, by the Lawyerist, part of the Legal Talk Network, in its Podcast #127: Rise of the Robot Lawyers and, secondly, by Amrit Sharma for BotList in Meet The Robin Hood of the Internet from which the following picture emerges.

Are parking tickets something people hire lawyers for in the UK? Well no, it was more a case of fighting “crooked local government” who use parking tickets as a revenue raising ruse. About half the tickets issued are disputable because of poor signage and other reasons (when designing DoNotPay he submitted an FOI request to establish the top 12 reasons).

He has now developed a decision tree builder and a document automation builder which, with the help of IBM Watson and three paralegal partners, will enable him to roll out hundreds of new bots in short order.

He realises his business does have to be commercially sustainable and is seeking to secure sponsors with no conflict of interest for each of the bots; so, for example, a leading driver education company will sponsor the speeding ticket bot.

Why use chatbots? Although he started off using web forms, Joshua soon discovered that, faced with various options on a form, many people aren’t confident enough to decide which option to select, whereas a chatbot can in a much friendlier manner convert a natural language answer into a correct selection.

Another important aspect of usability was to embed escalation procedures, so that if an issue can’t be dealt with by a bot, a suitable avenue for advice is given (in the first instance, this is Joshua’s paralegal team).

Localisation is also important for usability, particularly in the USA. Users are automatically offered only the procedures appropriate to their jurisdiction, based on their IP address (though this can be overridden).

New areas that are currently in the pipeline are for claiming maternity/paternity pay, getting out of unfair gym contracts, more motoring issues, fire safety issues and consumer protection claims; anything at this point that does not involve going to court.

“Legal technology is such an interesting field because technology has the potential to accomplish so much, but in legal technology everything is focused around lead generation, and getting people back to the traditional service of getting lawyers. That creates a tremendous opportunity because there are very few services that actually automate the tasks themselves. When the bot craze started, the main focus of a lot of chatbots in the legal space was primarily to get you a lawyer, and that actually isn’t very helpful.”

“Even if I don’t do it. Someone else will. We’re getting driverless cars today and sending people to space; how is it that we haven’t yet automated a few documents? It’s really such a low-hanging fruit. All you have to do is figure out how these documents are constructed and then use technology to automate them. I think we’re already doing far more complicated things successfully.”

At which point the legal technology companies will cry, “We’ve been doing this for years, and much more complicated stuff too.” But the point is, DoNotPay is all about the latent legal market, enabling easy and direct access to straightforward procedures currently claimed as their turf by lawyers, at no charge.

“DoNotPay provides a terrific illustration of how technology can be used for socially useful and democratic purposes. More important, though, it also suggests a better way of thinking about robotics and work – by making distinctions between tasks that can and should be automated, and those for which human experience, sensitivity and creativity are necessary. Much of what lawyers do is doubtless money for old rope – in which case we should not be paying through the nose for those services. We still need lawyers for many other things, for which there is no routine solution and which do require original thinking. So they may wind up poorer; but they’ll still have jobs, and perhaps be less bored. And we’ll all be better off.”

Joshua has not spent a penny on marketing: 300,000 satisfied users, who have themselves not paid a penny, are his best advocates.