This article is about a new product created by my firm called Crosselerator™ which I immodestly believe is likely to be one of the most profitable pieces of software for users that they’ll ever own. It was producing enquiries for us almost as soon as we started using it, and as I write this (Jan 2018) we are still 2 months away from any serious marketing. If you want to skip the “why” and just look at the “how”, scroll down to “How it Works”; the detail is in the series of videos on the Crosselerator YouTube channel. It takes only 15 minutes to watch them all.

We describe Crosselerator as “the software that turns everyday email into income – every day”. It is the first tech product our firm has built where the target market is not specifically professional practices: it can be used by any “silo” business (most largeish businesses are).

If a typical law firm was efficient at leveraging the value of the contacts it has and was being just a tad proactive, it would probably have a really big problem staffing up to cope with all the extra work … let’s face it, most firms claim that 80–90 per cent of their work comes in through repeats/referrals without them doing much to preserve, let alone deepen or energise, those relationships. Failure to leverage existing relationships is the principal reason why firms struggle to grow and their acquisition costs for new work are so much higher than they should be. Crosselerator is one of the tools we have built that does leverage existing relationships.

My experience (using 50+ law firms over the years) is that unless there is some imminent need to make changes (such as GDPR compliance at the moment) then serious efforts by the law firm to uncover new opportunities are very rare (see below). I mention this here because I grew my practice fast for more than a decade, organically, on a minuscule business development budget, simply by being more proactive than our competitors. Proactivity is still a massive differentiator.

In the two decades since I retired, we have built a series of products (words4business.com, legalrss.uk and now crosselerator.com) aimed at allowing firms to market more proactively and at much lower cost than the traditional online and offline business development approaches that still dominate law firm marketing budgets.

Proactivity is where cross-selling (or cross-referrals if you are sensitive about the word “selling”) comes in. When you do a business purchase or sale, or a house purchase or sale, or a tenancy agreement, or a divorce or an LPA, there may be many potential new areas of work which can open up – but only if the client is made aware of the issues they may face. Crosselerator was built to make sure that can be done.

Law firms are simply awful at it. Remuneration systems, workloads and lack of knowledge about other departments’ service offerings all conspire against firms. Over the decades I and the companies I assist have dealt with dozens of law firms, from small practices to leading regionals. Only one has ever attempted any form of proactive business generation after closing the file.

Many law firms know that this is a real Achilles’ heel and many have tried the solution of getting (expensive) training sessions organised to get their people to cross-sell the other services of the firm. When the managing partners of two firms told us that they had done this, at considerable time and hard cost, and it was an utter failure, we realised that this was something that can, and should, be automated.

What does the automation look like? It is about finding the simplest and easiest way of telling our existing contacts about events, services or anything else we think they would like to have brought to their attention, in a professional, non-salesy way.

To be effective, such messages need to be relevant and to be read.

The way we chose to do that is simple – we add messages (which can be anything – text, video, whatever) to ordinary everyday email traffic in a targeted, timely and intelligent way. (If you want to see the “why we did it” video, it is here – http://snip.ly/z7z4v. By the way, this uses snip.ly – a very powerful linking tool we have integrated into our legalrss platform.)

In order to make the process as efficient as possible, the fee-earners should not be involved with the system at all. As an accountant I have always baulked at fee-earner time being spent on anything other than fee-earning!

In order to ensure that the messages aren’t intrusive or repetitive, the system allows them to be varied automatically and if required to be added on once. It also allows images, videos etc to be used as well as text.

In simple terms, when an email is sent, the system adds targeted messages to the right people in the right groups at the right times. The altered email is returned to the sent items folder of the sender, so they are always aware what messages have been added to their normal email correspondence.

The logic can also be varied so that messages can be prioritised or repeated. Data about who reads the messages and who clicks on the links is recorded for follow-up.

Setting up is easy – each person whose messages are to be added to (Users) installs an Outlook add-in. The person running the system defines the segmentation necessary (Groups), adds the email addresses of Recipients to which messages will be added (this is a simple cut-and paste process) and then adds Messages. This is all done from a simple screen (see below).

This is the list of “live” messages addressing more than 14,000 email addresses: 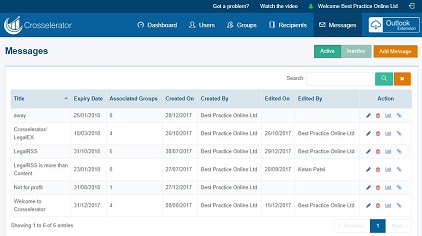 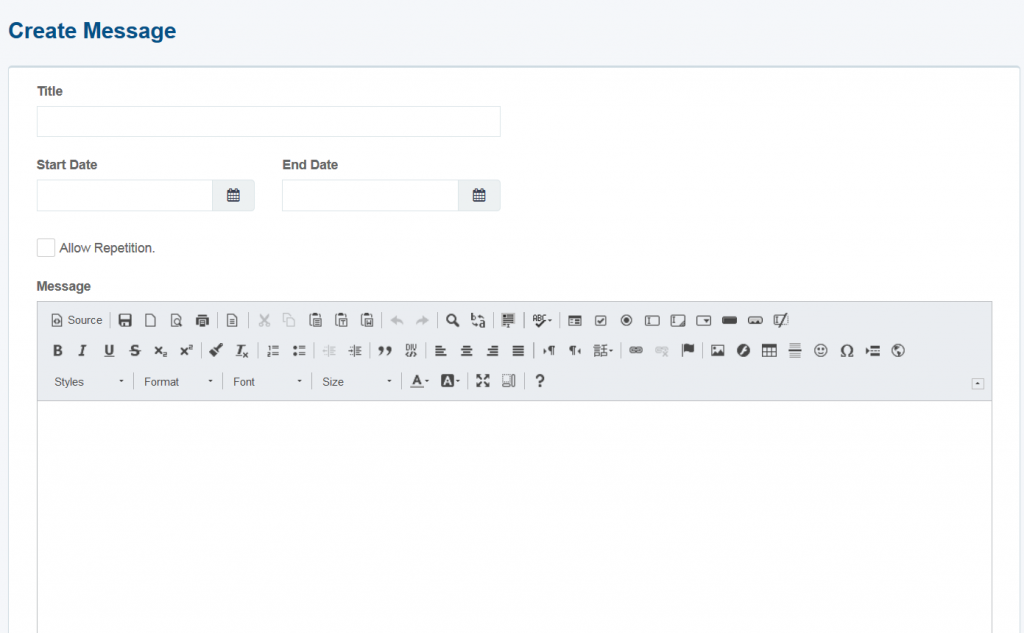 And allocated to the appropriate groups by a tick box: 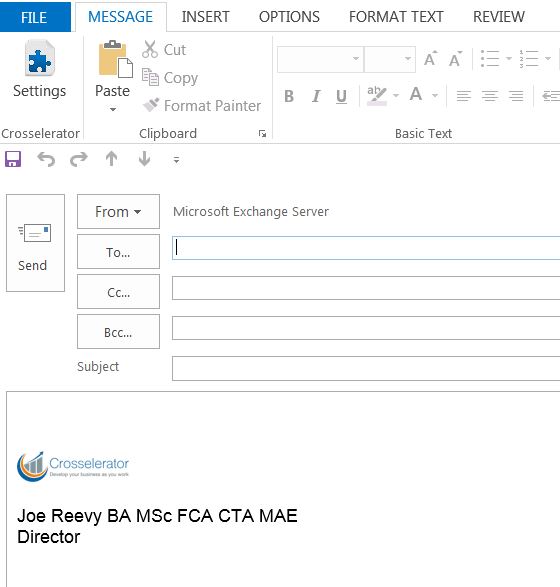 The Crosselerator logo just above my Outlook signature is a placeholder; it tells you where there the message will go; it disappears when the email is sent and is replaced by the message added by Crosselerator. The system can be suspended by the use by clicking the icon in the top left; when suspended, the icon will turn red and the placeholder will disappear.

Here is a Crosselerator message we used in January when this was written:

This message ceased on 26 January, when it was automatically replaced by another message.

Crosselerator works because the messages are:

b) not seen as mailshots or marketing emails, just helpful bits of extra information in ordinary correspondence.

Any business can use this; whilst we haven’t actually started marketing it yet, early adoptees include firms in professional services, a building materials, estate agency, IT and us!

One of the more interesting possibilities of the system is that, in principle, anyone sending email could offer pay per click (PPC) access to their client base via emails. For example, a firm could add a message from a local charity, the local chamber, another firm, highlighting an event …

All data are held in encrypted  form on a dedicated secure server in the UK.

After that, we’ll be building a version which works with Gmail and Office 365. Then … well, that’s a secret.

Like all our products, Crosselerator is priced so that one new client for every 5 users a year should put you in the black.