Developments in ODR and the online court

By Graham Ross • May 2018
Filed under Access to justice, ODR 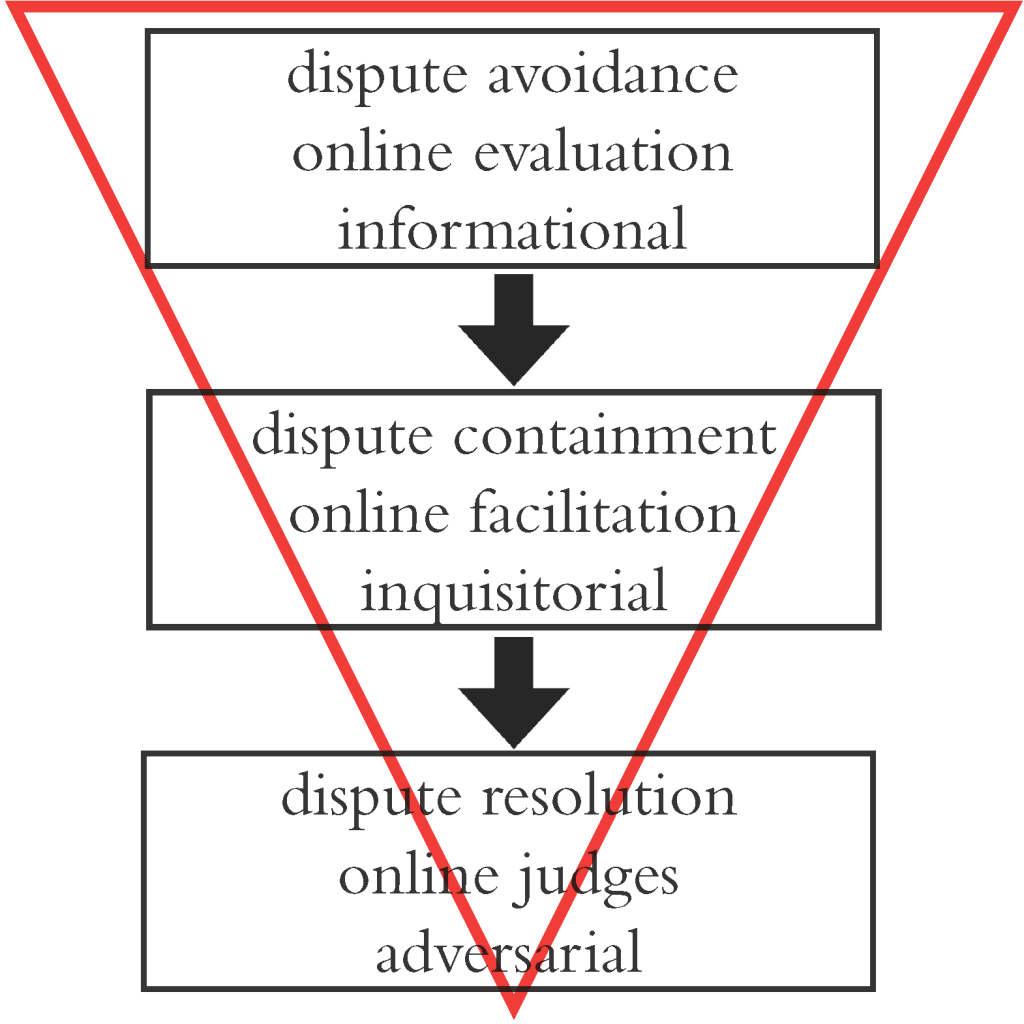 In an earlier contribution to the Newsletter I made the point that the partly hidden “A” as in Online Alternative Dispute Resolution, which tended to focus ODR’s perceived remit on out of court solutions such as mediation and arbitration, was beginning to disappear altogether as more focus was made on introducing ODR into the justice system itself.

Towards an online court?

I’m delighted that we now have the beginnings of an online court for money claims, with the redeveloped service now on GOV.UK in Beta; in time this will embrace ADR.

My concern is that we may have started a little early before the full online court design has been worked out. In reality it is the online court’s first baby steps but, somewhat worryingly, these are being taken before any decision seems to have been reached as to where precisely these baby steps are to lead to.

In the Report of the Civil Justice Council’s ODR Advisory Group (of which I am a member) on Online Dispute Resolution for low value civil claims in 2015, our recommendation was that HM Online Court be created and a three-tier journey be offered (pictured) taking litigants from a first tier advisory function to a second tier, where various forms of neutral facilitation to resolution will be offered, culminating in the third tier involving judges in interlocutory action and final determination conducted primarily online.

Lord Briggs, in his Final Report on the Civil Courts Structure Review devoted chapter 6 to his recommendation for the formation of an online court much in line with the ODR Advisory Group’s Report.

What does the new service look like? There seemed to me only one way to best do this. So I opened a case. I decided to sue Chelsea Football Club for representing on tickets that persistent standing would not be allowed whilst proceeding to turn a blind eye to fans standing throughout the game. The background is that I had bought a ticket in the “away” section for the Chelsea v Everton football match in February 2015 (the date is important). It was stated on the ticket that “persistent standing” would not be permitted. Despite the large contingent of stewards around the “away” section and despite my complaining to the stewards on several occasions that fans were standing throughout the match, thus requiring my having to also stand in order to see the game, they failed to take any action. I was left with pain and discomfort in my back for about 5 days after the game.

Secondly, the Report advised against just trying to digitise the current processes but to create a new process. So far it appears to be just e-filing for the current offline process.

Thirdly, the Report suggested tailoring processes to particular types of disputes and in this way deliver a platform and process more focused so as to better guide the litigant into the framing of the case and to enable the tailoring of resolution processes. So far it seems to take in all monetary claims of any nature up to £10,000.

The advice in the response to the Briggs Report was to not start with Tier 1. The rationale was that this would increase significantly the numbers of cases being filed while the processes ahead for this increase in the numbers of litigants would be the existing offline processes. This would likely lead to a jam and slowing down of the speed of the litigation. Of more concern, the vision of an online court with its modern entrance, would only disappoint when litigants find nothing new lying ahead. A far wiser approach would be to begin at Tier 3 (enabling judges to work more efficiently online), then move to Tier 2 (enabling court assisted ADR) and only when these processes were in place and ready to handle a significant increase in cases, to open the doorway to the expected increase in litigation with an online Tier 1. The added benefit of approaching in this way is that the Tier 3 work would be easier and quicker to implement and offer the greater cost saving.

Given that HMCTS have, apparently, decided to start at Tier 1, what have they achieved that is different than the 15-year old Money Claim Online system? The simple answer is not a lot.

The concept in the mind of the Advisory Group was that, at the Tier 1 entry level, the public would be able to obtain information on the law as well as benefit from a form of technology-aided diagnosis of their case and guidance into the options for resolving the matter. Apart from a series of questions designed to identify the basic information about the parties you are given a blank box in which to explain the case. Good case framing assists by offering open text input, to add anything omitted or make other comments, only at the end of the process after answering a set of case defining questions set out in a logic tree. To give a blank box at the outset to a litigant in person not only risks lengthy rambling statements with irrelevant comments that will take unnecessary additional time for the other party, neutrals and the judge to read and understand but it also amounts to just copying the existing process rather than exploiting new processes offered by moving online. Further, it loses the opportunity for the system to generate knowledge from a more structured form of case input that would open up the opportunity for meaningful analytics.

I was left with the impression that I could have answered with information indicating my case was totally devoid of merit with just a series of rambling random sentences and the case would have been issued on payment. This is not how an online justice system should operate.

Following this stage, the system then asks the claimant to complete a “Timeline of Events”. This is meant to be a list of events in the story line of the case with a date and a brief description. However, disappointingly, there are no questions focused on the grounds for bringing the claim.

As much as possible in a good and useful “guided pathway” one would be asking the parties to respond by ticking boxes in lists of alternate answers and in this way the parties are assisted not to just understand certain basic aspects of the relevant rules but also assisted in better framing of their position and in a way that the system can learn from to help it better provide useful guidance as well as analytics for the court administrators.

The shortcomings of this simplistic case filing process in failing to begin to properly exploit technology, is that problems for the parties are missed. In my own case, despite the fact that one element of my claim was for personal injury, being the back pain, and despite my stating it dates back to February 2015, ie just outside the 3-year limitation period, it was happy to take my filing fee without comment. In fact, I should have been dissuaded from using the system for this purpose with guidance at the very first question which is supposed to test that a claim is for a fixed amount up to £10,000.

The EU Regulation on Online Dispute Resolution in Consumer Disputes

I also covered previously in the Newsletter the EU’s Regulation on Online Dispute Resolution in Consumer Disputes (524/2013). Since it requires all companies selling to consumers online to display an “easily accessible” link to an ODR platform run by the EU that would refer dissatisfied consumers to an ADR provider approved for, amongst other matters, having a system on which discussions and exchange of information could take place online, it effectively meant that all online retailers throughout the EU, and outside businesses wishing to sell into the EU, would effectively take on the task of promoting ODR in the public’s conscience.

I also anticipated that, as far more people will experience consumer disputes than might be involved in a contested court case, it would help generate more knowledge in society of ADR itself.

The sad fact that has emerged from a Report released by the EU last December is that levels of compliance are very low. This study proves the truth of the claim to mass non-compliance that I had presented to the Westminster Legal Policy Forum on the 23rd May 2016 and , the following day, at the International Forum on ODR held at the Peace Palace in The Hague.

This new, and official, Report tells us that, despite a whole year having passed since the Regulation had come into effect, some 72 per cent of websites throughout the EU that were looked at were non-compliant. In the UK it was higher, 86 per cent. The situation is even worse than the headline figures, since the compliance level derived from the work of “mystery shoppers” who were asked to find a link as if they already had a complaint. As a result the Report claims that placing the link within Terms and Conditions (or complaint handling pages), to where a consumer might navigate to if he or she already had a complaint, satisfies the “easily accessible” requirement. I disagree. This ignores and defeats the principle objective of this legislation which was to encourage growth in cross border online consumer purchases within the Single Market by building confidence before the purchase has been made and a complaint arisen by notifying prospective consumers of the availability of an EU managed signposting service to introduce consumers to an officially approved ODR service. That requires placing the link on the home page and “above the fold”. Burying the link deep down within Terms and Conditions is not going to achieve the pre-purchase confidence in the retailer that the legislation was set up to achieve. It is a well-accepted fact, which we know if only from our own conduct, that very few people bother to read Terms and Conditions unless they have a specific reason to do so. We all lie regularly by clicking to say “I have read, understand and agree to the Terms and Conditions.” Evidence has been published to reinforce this universal truth.

The reality is that as, out of the 28 per cent with any link at all, and who were described as compliant, 83 per cent had it buried in various legal terms that would not be read by consumers, the true figure for compliance is thus less than 5 per cent!

New ODR systems continue to be developed. Some interesting ones include Resolve Disputes Online which is a comprehensive case management and dispute resolution platform with much flexibility between mediation and arbitration. Essentially with this software you could run a comprehensive private online court.

Smartsettle, which has been developing patented AI driven ODR systems for highly complex multiple issue disputes, has now brought out a simplified online mediation system combining asynchronous discussion areas designed for online mediation with an advanced and highly flexible and adjustable visual blind bidding tool all on the same page.

An Olive Branch is an interesting newcomer that focuses on helping those in dispute through panel mediators to better frame their messages and discussions to increase the prospect of resolution. I must declare an advisory role with the latter two systems.

Image: from the 2015 ODR report, Crown copyright, reproduced under the Open Government Licence.

Many of the Fellows and founders of the International Council for Online Dispute Resolution, including Graham Ross (as Chair), together with Lord Briggs, Joshua Rozenberg (whose recent ebook focuses on the online court) and many others, will be presenting at a conference entitled Online Dispute Resolution: Justice Re-Imagined, in Liverpool on 27 and 28 June.

More details are at www.odrconference.com.