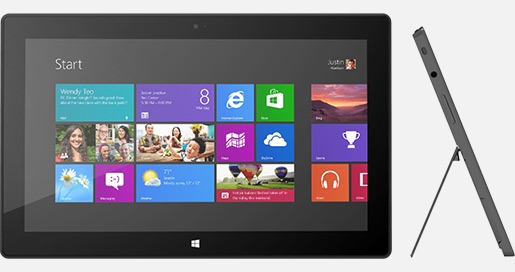 My new Microsoft Surface RT was delivered on 31 October 2012. Not since I was a young boy opening the box to a Dragon computer or a BBC Micro had I so anticipated owning a new computer. (I never got a Sinclair ZX Spectrum or a Commodore 64.)

The Surface is a slick looking piece of equipment. The tablet itself looks, on the face of it, like the iPad or other similar tablets. What is different is (1) the optional touch keyboard that is wafer thin and doubles as a cover; and (2) the kick back stand that enables the screen to be propped up for ease of working with (or indeed without) the keyboard.

The touch keyboard is surprisingly responsive and effective. The way it attaches to the Surface via magnetic contacts is also very neat. Lawyers like producing lots of words and a keyboard is probably essential to them for day-to-day working. Having said that the Surface is unlikely to replace the desktop PC but will be useful when on the move (I originally typed this up on my Surface on the train from Inverness to Glasgow). If, however, you are going to use it more often than not with the keyboard, do you really need a Surface rather than simply a laptop, notebook, ultrabook or netbook? More thoughts on that point later.

You can also purchase a standard style type keyboard/cover for the Surface. However, I can’t see any great need for that as the touch keyboard works perfectly well and will be more compact. Some lawyers may, of course, like something more traditional!

The touch cover comes in multi-coloured options but the UK online Microsoft store seems to encourage black and the only alternatives available when I placed my order were white and cyan. My one is black. Whilst the touch keyboard is also a cover it does tend to flap open unless wedged between other things in a bag or briefcase. You might still want a sleeve to put it into and no doubt plenty of accessories along those lines will be springing up if they haven’t already.

Once I switched it on (took me a little while to find the switch!) I was guided through a quick and easy setup.

The Home Screen has lots of tiles on it that you can move around to suit where you want them to be and click on to activate. This I was already very familiar with having had a Windows phone for some time. When you download Apps (formerly called Metro Apps but now simply Microsoft Store Apps) they sit here as tiles. Already installed are Apps for Mail, Messaging, Calendar, etc. Others can easily be downloaded from the Store.

One criticism often directed at Microsoft is the shortage of Apps available compared to Apple or Android. Given that Microsoft has entered this area a little later than its competitors then that is not surprising. My view is how many Apps do you really need? If your main purpose is business orientated (as mine is) you will probably be satisfied with what is currently on offer with a few desirable additions probably not far away. No doubt if the Surface and other Windows RT/8 tablets gain in popularity so will the range of Apps available. Tim O’Brien, Microsoft’s general manager of Developer & Platform Evangelism, recently said:

“I think when you look at the size and scope of the market opportunity just in terms of the number of devices going to market – and I appreciate that Apple’s done a tremendous job just driving consumer demand for the products that they sell and people really like – then you look at the order of magnitude on the PC side, on the Windows side, it’s ”¦ not tens of millions, it’s hundreds of millions. I think if I was a developer I’d have to stop and think: is this something I really want to ignore?”

One of the first Apps I downloaded was Remote Desktop as I was keen to logon to Inksters’ cloud via the Surface. This App allowed me to do so with ease. I had read that Remote Desktop was pre-installed on the Surface but I couldn’t easily locate it so just went to the Microsoft Store and downloaded it from there. I later discovered how to locate the pre-installed App. Not immediately obvious but it is there. When logged onto my law firm’s cloud the experience was no different from doing so via a netbook other than the ability to use the tablet’s touch screen. Indeed when I now switch back to using a netbook I have touched the screen expecting it to react but alas without any result. It is amazing how quickly you adapt to touch screen technology as the norm. If though I end up, on the whole, using the Surface just as a gateway to my law firm’s cloud would I not be as well just using a netbook? Will a touch screen add much to that experience? It is too early to tell at the moment but I will no doubt come to a view over the advantages, if any, for a lawyer of a Surface over a netbook in due course.

For a lawyer who uses Microsoft Word (the vast majority, of course, do) the Surface has Word (as well as Excel, Powerpoint and OneNote) pre-installed as part of Microsoft Office 2013 RT. This for me will be handy if I am somewhere without internet access and have a need to work on documents when not able to connect to my law firm’s cloud. That is becoming less of an issue though. Even the train between Inverness and Glasgow now has WiFi on it. I could, of course, already do this with my netbook so nothing new there for me. It does, however, add a dimension to having a tablet if you are a lawyer and want easy access to all Microsoft Office offers on that tablet. Easier integration clearly exists if all your devices are Microsoft ones. That is the view I took at Inksters when relevant staff were issued with Windows mobile phones rather than iPhones, Blackberries or Androids. I think it is that integration that should make the Surface more appealing to lawyers than other tablets on the market. That is if lawyers really need a Surface at all. For me the jury is still out on that question. I have only had a Surface for a couple of months and really need longer to see if I use it as a tablet rather than just as I would use a netbook.

Brian Inkster is a solicitor and the founder of

Inksters Solicitors. This article first appeared as a blog post on Brian’s blog, The Time Blawg.