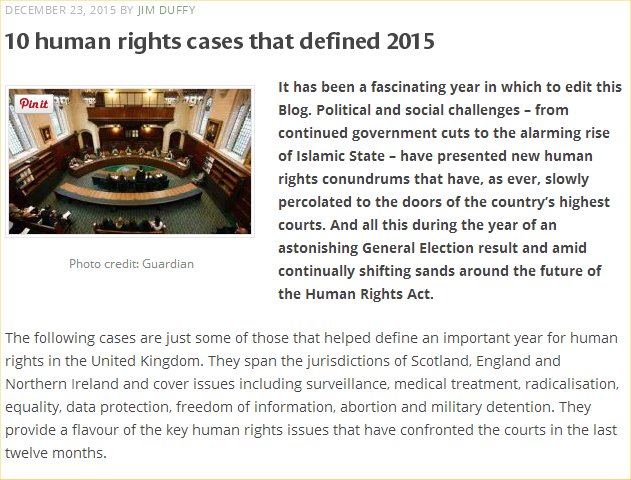 UK Human Rights Blog arrived on the scene in 2010, when Adam Wagner of 1 Crown Office Row took over Chambers’ longstanding Human Rights Update website. He turned it into an interactive news-based platform and broadened not only its readership but also the range of contributors. It rapidly engaged a wide following, from law students and other legal practitioners, to journalists and editors and members of public alike.

It is one of the longest surviving of the law blogs, and goes from strength to strength. Apart from Adam Wagner, the General Editor, Jim Duffy is the Blog’s Commissioning Editor and he leads an Editorial Team comprising David Hart QC, Angus McCullough QC, Martin Downs and myself. A number of factors contribute to the blog’s popularity, chief of which is its editorial range. Unlike much other legal commentary sites on the web, it benefits from a stable of contributors in Chambers, most of whom have been involved in important human rights and public law cases. We also accept guest contributions from academics, NGOs, and experts in the field.

We have reciprocal arrangements with other chambers and solicitors’ firms for reposting articles. As a consequence there is no single authorial voice or bias on the many subjects we cover, and this seems to appeal to those of our readers and subscribers who prefer information over opinion.

Since we set out with our original brief to follow and demystify human rights cases we have widened the range of topics we write about. The topic of “human rights” in its broad sense arises in many areas where the citizen and the law intersect; there does not need to be a Convention right at stake for a ruling to have serious consequences for the individual. The rulings of the Court of Protection for example, involving the vulnerable, the sick, the young and the old, are routinely covered even if they do not mention “human rights” as such.

Nature and the environment are protected by law, and respect for the integrity of our natural surroundings is beginning to be regarded as an important component of human happiness. Rights to environmental information and justice under the Aarhus Convention as well as the state’s obligations under the EU Habitats Directive are therefore considered part of the UKHRB’s remit. We also follow closely the law’s increasingly uncomfortable fit with publications on the internet, the liability of internet service providers as “publishers” and copyright issues. Even though the right to privacy may not receive any express mention in these disputes, all these matters intersect in a way that is fundamentally important to individual’s interests.

Developments in biomedical science and reproductive technology have a profound impact on the relationship between the individual and the state as well as the continuing debate about the responsibility of the electorate, judges and doctors regarding end of life management. Medical and care decisions in the courts are therefore part of our coverage as are legislative and judicial developments concerning advances in genetic information and medicine. These are all areas where an individual’s health and privacy are at stake.

Developments concerning the relationship between the UK’s Convention and EU human rights obligations are closely monitored, particularly in the light of current debates about this country’s allegiance to either. In all of this we seek to supplement the somewhat polarised debate in print and social media with accurate and level headed discussion of the issues involved. Judgments are a matter of public record, so we are free to analyse cases and discuss the questions at stake, however sensitive. We are happy to talk to the press and engage in media debates about issues covered in the blog and indeed members of chambers have been quoted on a range of matters from jihadist brides to the liability of internet service providers under libel law.

The law and its dispensation will continue to be a central focus of the news and internet publications such as such as ours should continue in their role of supplying helpful information, forming a bridge between politics and the law in the interests of accountability and social responsibility.