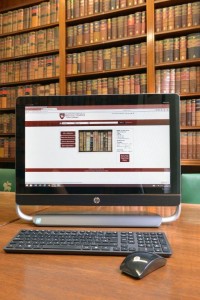 Middle Temple is one of the four Inns of Court responsible for calling students to the Bar. It is a modern institution with ancient foundations, and this can be handily demonstrated by how the Library has grappled with new technology over the centuries, leading us into the internet Age. A library has existed at Middle Temple since at least the time of Henry VIII, although this was eventually emptied by members as the doors always remained unlocked. It was in 1641, at the bequest of Robert Ashley, that a library at Middle Temple was re-established. From then on the Library has continued to grow, and today houses over 250,000 volumes, encompassing the whole range of British, Irish, EU and US legal research resources.

The increased reliance on the internet has affected Middle Temple Library in a number of ways, including the practicalities of library management, online legal research and training, social media and online marketing and distance services to users outside of London. Some of these factors combine to demonstrate how an ancient institution is able to thrive and prosper in the modern world of Google, tweets, apps, tablets, e-books and electronic legal research.

It is interesting to note that part of the impetus behind hiring the first professionally qualified librarian as Keeper of the Library (Charlotte Lutyens in 1969) was the major changes wrought in library management by the introduction of the computer. However, it wasn’t until her successor, Janet Edgell, was appointed in 1989 that the first computers were introduced, after advising the Library Committee that the Library should be automated and a systems librarian hired. In 2000, a full network of computers providing access to legal databases and a more sophisticated library catalogue was installed. In 2014, a new version of the online catalogue was introduced, with e-books on iPads fully integrated into the rest of the collection.

The Library maintains pages on the Inn’s website. From here, a range of resources can be accessed, including our list of electronic resources and a set of pointers to free Links for Lawyers. The library subscribes to over 30 databases, including the major electronic legal resources of Westlaw and Lexis (and their US counterparts), Justis, Lawtel, Casetrack, HeinOnline, Practical Law, as well as general research tools such as the OED Online. Although licensing restrictions prevent us from offering remote access, all the databases can be accessed by anyone in the Library and are heavily used. A healthy proportion of the Library’s collections budget is spent on e-resources, reflecting the importance of electronic legal resources for members of the legal profession.

Links for Lawyers is a page created by Library staff to act as a signpost for barristers, pupils and students conducting electronic research, listing links to free legal websites. It also provides links to other internet gateways created by law libraries, such as Inner Temple’s Access to Law created by Inner Temple, and Eagle-i, from the Institute of Advanced Legal Studies. A useful feature is a list of apps which are useful for legal practitioners, and ties into the Library’s forays into utilising iPads in delivering its services.

Middle Temple Library reaches out to members who find it more convenient to access us remotely by offering a document delivery service, and its development reflects how the Library has adapted as on online service. Since its foundation in 1990, the service’s main methods of delivering and requesting material were by post or fax. Now the overwhelming manner in which copies of material are dispatched is by email, with users requesting copies using an online copyright declaration form. This is more flexible and creates a speedier service – all important when requested material is required urgently for court.

The Library’s primary excursions into social media happen on Twitter, where content is published on a daily basis, and Facebook, where the Library posts relevant content at least once a week. It is a very useful way for the library to disseminate news to members and other interested parties, quickly and freely. For example, the Inn’s Twitter feed reaches upwards of 40,000 users.

Social media also offers an example of a joined up approach to using the internet. The Library publishes a newsletter which is freely available on the website, and when the latest issue was published, it was advertised via an e-bulletin to all members, as well as on Twitter. A Facebook post followed which expanded on content contained within the newsletter. In this respect, social media functioned not only as a marketing exercise, but also to update, and remind, members and others of new and key library services. The use of social media also links the Library to similar organisations in London and around the world. We have close connections with the other Inn libraries, as well as connections reflecting our jurisdictional specialisms of US and EU law. Not only is Twitter useful for us to reach out to others, likewise we receive valuable information from our partners and collaborators, which we can then pass on to our members if relevant.

The use of social media also keeps the Library in touch with members who aren’t able to visit us physically. It is important to remember that social media is an interactive service – it allows us to better interact with our members who are all over the world and may very rarely, if ever, visit the physical Library.

The history of the Library catalogue also works as a history of the library’s use of technology over the centuries. The Library’s first catalogue was compiled in 1655, a copy of which no longer exists, although a multi-volume catalogue compiled in 1683-4 still resides in the Archive. In 1700, the Library’s first printed catalogue appeared, succeeded in 1734 by a more user-friendly one arranged by author and title. Subsequent catalogues were published in 1845, 1880 and 1914, with supplements issued in 1925. After this, a card catalogue was introduced and updated right up until the end of the last century when the computer catalogue was introduced.

The online catalogue is available from any computer terminal or hand-held device with internet access. The catalogue allows users to search by author, title or subject, or by using a combination of the three, and provides details of online content where available. It also links to the Library catalogues of the other Inns of Court.

Use of iPads and e-books

The library has been innovative in its use of iPads, which were first trialled in the Library in 2013. At present, we have five iPads, one of which is loaned out to members for a small charge, and four others to be used for training purposes. There are currently over 20 e-books on the loanable iPad. Books purchased which come together with an e-book will have the electronic version installed or uploaded to the iPad which is then made available for members to borrow. Members can borrow the iPad for up to one week at a time (in contrast, books can only be borrowed overnight). This is useful if content is needed to be referred to in court early the next day. For the Library, the price of the iPad is not dissimilar, and is often cheaper, than many legal textbooks.

As library patrons use online resources more and more, and in conjunction with hardcopy, the Library’s online presence, and the expertise its staff have in navigating the world of online legal resources, are ever more important. A key function of librarians today is to train users in effective research techniques and information literacy, and Middle Temple Library is experimenting with new ways of doing this.

As well as traditional lecture style presentations used to teach legal research to students, pupils and experienced practitioners, the Library uses its iPads in training members. A number of avenues for interactive training are being explored.

The Library is experimenting with the use of free educational apps to enhance the learning experience. One such app is Socrative, which allows for the creation of a virtual classroom where we can reach members who aren’t in London. Socrative is also compatible with a range of operating systems and devices with an internet connection. As the “teacher”, I can set up quizzes and exercise which are given a classroom ID – users who have downloaded the app can quote this ID number to gain access to the “teaching room”. From here they can answer a series of questions which aim to test, and reinforce, what has been taught. The creation of a “virtual classroom” is especially useful to an organisation like Middle Temple which has many members who find it more convenient to access the Library and its services remotely.

Screen capture software can also be installed on iPads so that a PowerPoint presentation can be recorded, overlaid with a voice recording, and then used to demonstrate key online resources. Once created, the video can be uploaded to YouTube. Built in to the recorded sessions can be space for exercises and questions, which can be formatted using the Socrative app. Other technologies, not reliant on apps, can also be used so the Library reaches as many members as possible who are not able to visit the physical library.

Not everything is online!

It’s important to remember that online resources are used in tandem with what’s physically available in the library – and not everything is available online! The Library can continue to thrive by utilising online methods of training users how to make the most of hardcopy and online resources, to explore what options are available, and to reach out to members using online tools.

Even though Middle Temple is an ancient institution, we are still fit for purpose in the internet Age. Innovations in technology allow the Library to reach out its core users more effectively, be that in marketing, legal resources or legal research training.